Certification flights for Ka-62 helicopter get under way

Russian Helicopters has begun certification test flights of the Kamov Ka-62 intermediate-twin and intends to complete the activity in 2020.

So far, three prototypes of the 6.5t helicopter have flown to confirm its flight characteristics and performance. 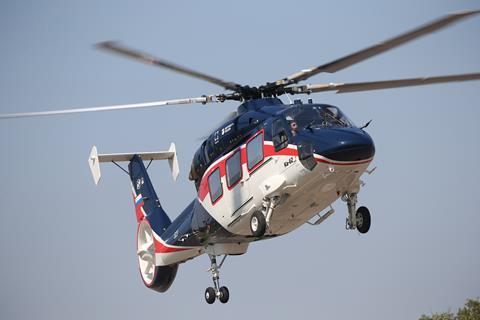 Russian Helicopters says the certification programme will encompass 480 flights which will be carried out by both by design bureau Kamov and aircraft manufacturer Progress Arsenyev Aviation Company (AAC).

“The helicopter meets all modern requirements and has great export potential. Oil and gas companies and other civilian organisations are interested in the aircraft,” says Russian Helicopters chief executive Andrei Boginsky.

In addition, Progress is gearing up for serial production of the Ka-62, with the aim of delivering the first examples this year.

Russian Helicopters also intends to seek European Union Aviation Safety Agency certification for the type – a rare move for the manufacturer, with only the Ka-32 so far approved by the body.

“The production capacities of the enterprise are designed to produce up to 45 helicopters per year, both military and civilian, so we are fully prepared to increase production volumes,” says Yury Denisenko, managing director of Progress AAC .