Additionally, the German government will pursue a Foreign Military Sales (FMS) competition to consider the CH-53K for its forces.

The first batch of operational CH-53Ks are being assigned to Marine Heavy Helicopter Squadron 461 (HMH-461) based at Marine Corps Air Station New River in North Carolina. The aircraft replace the squadron’s CH-53E Super Stallions, which were originally fielded in 1988, according to the squadron’s website. 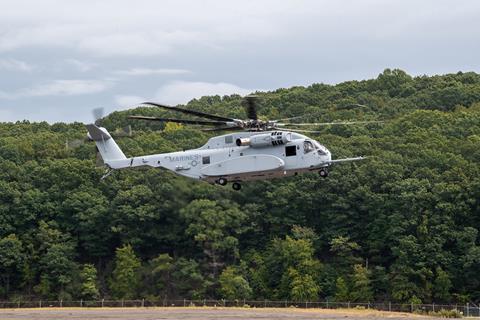 The King Stallion is vastly more advanced than its predecessor, according to USMC Colonel Jack Perrin, also a test pilot and the uniformed officer overseeing the CH-53K programme.

Speaking at the 2022 Navy League Sea-Air-Space conference on 5 April, Perrin described the CH-53K as “the easiest airframe I’ve ever flown”, adding that he has flight time on 30 different fixed-wing and rotary aircraft.

According to Perrin, the CH-53K has already exceeded those performance marks in real-world conditions. In August last year, a CH-53K landed an externally-loaded LAV at the summit of a 2,400m (8,000ft) ridge in the USMC’s 29 Palms training range in the California desert.

The King Stallion was also called to support a real-world search and rescue mission when a US Navy (USN) MH-60 Nighthawk helicopter, also made by Sikorsky, crashed high the Sierra Nevada Mountains while searching for a lost hiker.

Navy officials determined no aircraft from the USN, USMC or US Army had sufficient lift to remove the 6,895kg load at an elevation of 3,657m.

The King Stallion uses three GE Aviation T408 turboshafts, rated at 7,500shp (5,520kW) each. At the time of the incident, the USMC told FlightGlobal that the high-altitude recovery mission was a good demonstration of the helicopter’s abilities.

“This is exactly what the K is made to do,” said Lieutenant Colonel Luke Frank. “Heavy lift is a unique and invaluable mission for the Marine Corps. Horsepower is our weapon system and the CH-53K is armed to the teeth.”

CH-53K programme manager Perrin says the lift capability is not the King Stallion’s only asset. Its fly-by-wire flight controls allow for a much-safer landing in low-visibility conditions, such as when dust or snow obscure the crew’s view. The aircraft’s in-flight stabilisation and digital landing systems reduce hazards and give pilots much greater control during obscured landings.

The King Stallion’s high-tech features are not limited to the cockpit and airframe. Sikorsky says it has deployed next-generation automation and augmented-reality tools in its CH-53K production line in Stratford, Connecticut.

“Compared to legacy production lines, the 53K line is quiet and substantially more automated,” says Sikorsky programme director Bill Falk. He says that allows for faster builds at a lower cost and with improved quality. 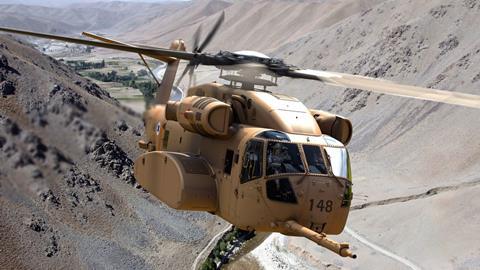 A Sikorksy worker on the CH-53K production line may wear augmented-reality goggles paired with an automated torque wrench. The goggles provide the technician a colour-code overlay, indicating the order torque bolts need to be tightened. The automated wrench, once placed in the correct position, independently tightens each bolt to the correct level.

The system will not allow the operator to move out of order. It also feeds a digital log of each action, allowing for faster and more reliable quality assurance and quality control. Sikorsky has also incorporated fully-robotic inspections for foreign object debris, a critical safety task.

Sikorsky has been contracted to build 46 CH-53Ks; 42 for the USMC and four for the Israeli air force, which Lockheed says intends to purchase 12 King Stallions. Sikorksy has 14 more aircraft on so-called “long-lead” production contracts.

Perrin also reveals that Germany has decided to hold an FMS competition for a heavy-vertical-lift platform and will consider the CH-53K. A Boeing-Airbus partnership is pursuing a sale of CH-47 Chinooks to Germany. Perrin says a decision by Germany is expected by the end of 2022.

The USMC says it ultimately expects to purchase 200 of the aircraft, with full operational capacity reached in 2029.