AgustaWestland is on track to deliver its first batch of AW159 maritime helicopters to South Korea later this year, as its Wildcat continues to gain operational experience with the UK’s armed forces.

Seoul has ordered an initial eight AW159s for its navy, with armaments including Rafael’s Spike NLOS air-to-surface missile and a South Korea-developed torpedo. The rotorcraft will be capable of carrying up to four of the Israeli weapon, which weighs around 75kg (165lb) and has a range of approximately 25km (46nm).

“We are on track to deliver the aircraft to our customer later this year,” said Tony Duthie, AgustaWestland’s head of market development for the 6t helicopter.

A combined total of 48 Wildcats have been delivered so far to the British Army and Royal Navy, with the latter having deployed the new model onboard its Type 23 frigate HMS Lancaster earlier this year. 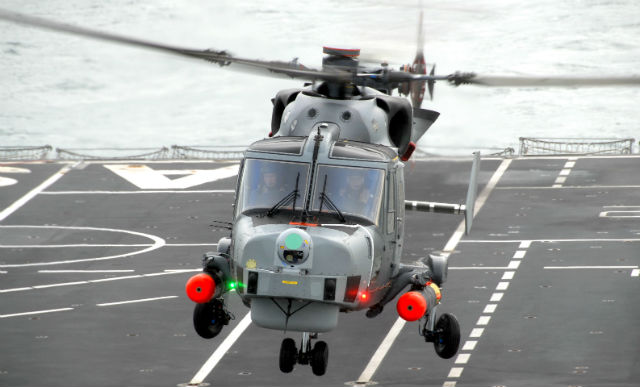 So far, the embarked aircraft has achieved a 100% availability rate during its time at sea, says Cdr Louis Wilson-Chalon, the UK’s Lynx Wildcat Maritime Force commander, during the DSEI exhibition in London on 16 September. Meanwhile, a separate trial performed in the Middle East has seen the rotorcraft demonstrate its maximum take-off weight in hot environmental conditions.

Future trials are set to be performed to integrate the UK aircraft’s MBDA Sea Venom anti-ship and land-attack missile and Thales Martlet air-to-surface missile, with these expected to be operational with the RN around 2018-2019. In the nearer term, Selex ES is within weeks of completing delivery of the Wildcat’s HIDAS 15 defensive aids system equipment, the company says.

More than 10,000 flight hours have now been logged by the UK services’ fleets, along with more than 1,200 deck landings.

While the UK and South Korea are the only customers to date for the new-generation member of the Lynx family, Duthie notes that the manufacturer is seeing “interest in many parts of the world, driven by ship-building programmes”. The AW159’s small embarked footprint makes it suitable for deployment onboard offshore patrol vessels and corvettes, he adds.