Turkish Aerospace is confident of more international sales for its T129 attack helicopter, given the demanding process that Pakistan put the rotorcraft through prior to its recent 30 aircraft order.

A schedule has yet to be set for deliveries as there remain export license formalities that need to be sorted out with the Turkish and Italian defence ministries, said Gorkem Bilgi, corporate marketing manager at Turkish Aerospace.

Rome is involved because the T129 is largely based on the Leonardo Helicopters AW129 Mangusta. In addition, the helicopter’s T800 engines are produced by a joint venture between Honeywell and Rolls-Royce – the Light Helicopter Turbine Engine Company. 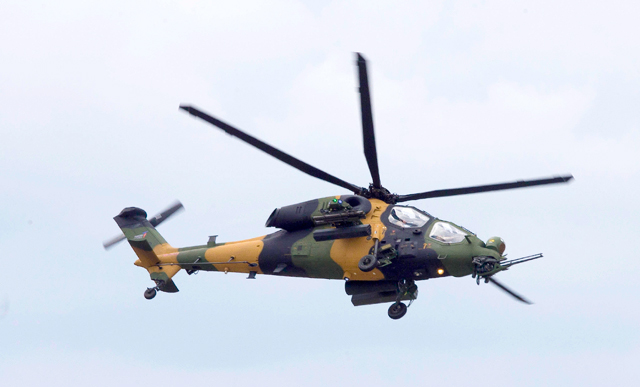 Bilgi spoke with FlightGlobal in the company’s static display. Once these formalities are sorted out, Bilgi says that deliveries can commence in three months. The deal involves the helicopters, logistics, training, and weapons.

He says the Pakistan deal is a watershed for Turkey’s aerospace industry.

“Following Pakistan there are a lot of countries that we are negotiating with,” he says. “Pakistan is a tough customer. We went to the Himalayas for high altitude tests, we went to desert for testing in hot conditions at 52C. They tested the helicopter for four years. It’s kind of a diploma – if you sell a helicopter to Pakistan, then all countries are interested.”

Specifically, the T129 is in contention for attack helicopter requirements in Morocco, Thailand, and Bangladesh. Of these, Morocco is looking at an acquisition of 24 rotorcraft and Thailand 12-15, while Bangladesh has yet to decide how many it will obtain.

While Bilgi says the relationship with Leonardo, which helped develop the T129, is strong, the companies have different attack helicopter paths in the future. Turkish Aerospace’s focus going forward will be on the Atak II helicopter, while Leonardo is concerned with the AW249.

In addition, in 2021 Turkish Aerospace will embark on a ten-year effort to build 109 UH-60 Blackhawks. Equipped with a large percentage of local content, including a glass cockpit produced by Turkish firm Aselsan, these will be designated the T-70I. The company also sees substantial export potential for locally produced Black Hawks, with Sikorsky leading this effort.