Supply chain problems have put paid to Airbus Helicopters’ target of performing a first flight of its Racer high-speed rotorcraft technology demonstrator in 2022.

Originally slated for 2020, the milestone has been pushed back on several occasions, largely due to the difficulties caused by the coronavirus pandemic.

But Airbus Helicopters says the schedule has slipped again, with the maiden sortie now expected in 2023. 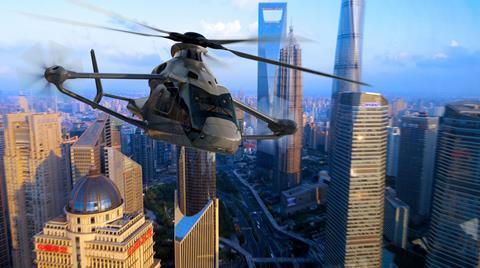 Assembly of the Racer has been progressing at the manufacturer’s facility in Marignane in southern France. Major sections including the fuselage, box wings and fuel system had been received and joined.

But “disruptions in the supply chain” and late delivery of some undisclosed components mean the “demonstrator’s flight campaign has been rescheduled to 2023”, says the airframer.

“Nevertheless, we are currently preparing the power-on in the coming weeks in order to maintain progress towards the first flight.”

Developed as part of the EU-funded Clean Sky 2 programme, the Racer’s compound architecture builds on the airframer’s earlier X3 design, incorporating twin pusher propellers mounted on the tips of V-wings.

Other notable features include an H-shaped vertical tail and asymmetric tail boom, which contribute to anti-torque control at higher speeds.

Airbus Helicopters hopes the Racer will be able to achieve a cruise speed of 220kt (407km/h). In addition, one of its twin Safran Helicopter Engines Aneto-1X turboshafts will be able to be idled and rapidly restarted during the cruise, contributing a 15% fuel-burn reduction while at 180kt.