The French army’s ALAT light aviation command believes its helicopter fleet will be well-positioned until the 2040s once a forthcoming modernisation effort is completed.

That will see the replacement of two legacy platforms – Aerospatiale Gazelle light-singles and Puma medium-twins – with new rotorcraft types, plus the upgrade of its attack helicopter capability under the multi-national Airbus Helicopters Tiger MkIII programme. 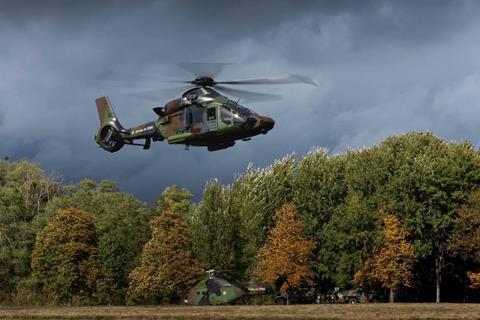 A key plank of that process was initiated in December when the DGA, the French military procurement agency, placed an order for the first 30 of an eventual 169 Airbus Helicopters H160Ms.

Deliveries to the ALAT will begin in 2027, with 21 aircraft from the initial tranche allocated to the service. It plans to eventually field 80 examples of the medium-twin as replacements for its 109-strong Gazelle fleet.

“It will allow us to outperform our adversaries until the arrival of disruptive technology in 20 or 30 years,” a senior ALAT commander, speaking under Chatham House rules, told Defence IQ’s International Military Helicopter conference in London on 16 February.

He identifies higher levels of interoperability with ground forces, plus a manned-unmanned teaming (MUM-T) capability, as two key attributes that will be introduced with the new helicopter.

It will also be “complementary” with the improvements destined for the Tiger fleet under the MkIII upgrade programme, which “will enable us to adapt until 2050”, he says.

Service entry for the Tiger MkIII, which is being developed in partnership with Spain, is due towards the end of the decade and will allow the army to build on the “combat-proven platform”, giving it “high-end strike capacity”.

The Tiger will gain improved sensors, crew helmets, communications and avionics systems. New weapons will also be integrated, including air-to-surface and air-to-air missiles. In the latter case, the ALAT commander says they will be “Mistral 3+” missiles, a seeming advance on the Mistral 3-standard munitions currently integrated on the platform. Manufacturer MBDA did not respond to questions on the difference between the two variants.

MUM-T capability is also to be included, giving the Tiger the capacity to operate “collaboratively and interoperatively” with unmanned air vehicles (UAVs). 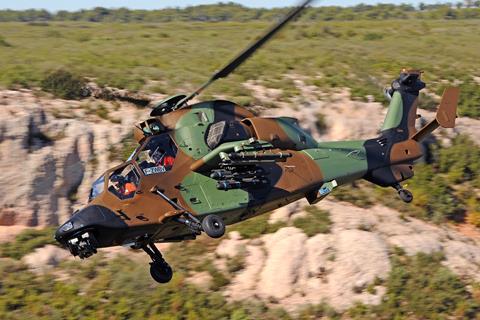 Tigers will be upgraded to MkIII standard

Although he argues that “manned combat aircraft will remain at the centre of aero-combat until at least 2045”, the introduction of MUM-T will be a “force multiplier” for the army.

He also forsees a future step, to be implemented from around 2035, under which the aircraft will be able to “fly and to fight with not only one major UAV but also with a [drone] swarm”.

However, the ALAT commander stresses that the French government must fully commit to the Tiger MkIII programme in its next LPM – the country’s multi-year defence planning budget; the current iteration, released in 2018, covers the 2019-2025 period.

He emphasises that the upgrade should allow the helicopter to link to the French army’s Scorpion battle management and communications system, allowing crews to “know the exact position of every French unit” and to have access to “the real-time situation of the land battle”.

In addition, he calls for continued upgrades to the army’s fleet of NH Industries NH90 Caimans, which are replacing its elderly Pumas.

Describing the NH90 as “combat proven” thanks to its deployment as part of France’s Operation Barkhane, an anti-insurgent fight in the Sahel region of North Africa, he stresses the platform’s “strong potential for development for the challenges that await us”.

Deliveries of the first of 10 NH90s in the Standard 2 configuration will begin in 2025, and will provide a “qualitative leap” in performance. A planned future step, which is yet to be contracted, will see the addition of a new distributed aperture system to enhance operations in degraded visual environments. This, he says, will “allow us to go further in greater security”.