Germany has ordered 31 NH Industries NH90s under its Sea Tiger programme, as it moves ahead with plans to retire its navy’s current fleet of elderly Westland Sea Lynx anti-submarine and anti-surface warfare helicopters.

To be deployed from 2025, the helicopters will be equipped with a mission system that includes an active dipping sonar, passive sonar buoys, weapons – torpedoes and missiles – and Leonardo’s LEOSS-T electro-optical sensors. 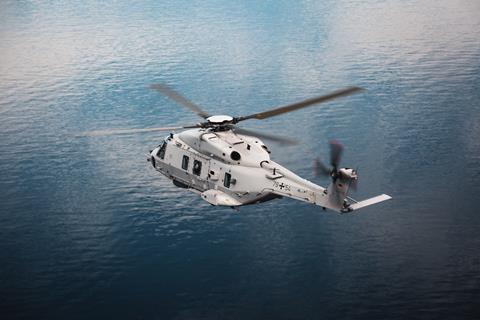 Configuration will be based on existing Sea Lion helicopter

Germany has previously indicated that deliveries will begin in 2024 to meet the out-of-service deadline for the 24-strong Sea Lynx fleet, which entered service in 1981.

Berlin has already received seven of an eventual 18 NH90s under the Sea Lion effort, which replace its navy’s Westland Sea King transport fleet.

Airbus Helicopters, which holds the largest share in the NH Industries consortium, says that the Sea Tigers are based on the Sea Lion’s configuration.

Germany’s army is also a customer for the troop transport variant of the NH90, with 76 in service, according to Cirium fleets data.

Assembly of the Sea Tigers will take place at the Donauworth facility of Airbus Helicopters in southern Germany.