Germany is moving ahead with an acquisition programme to replace its air force's Sikorsky CH-53 heavy-lift helicopters, with the choice narrowed to two types.

One key driver for Berlin's effort under the fledgling heavy transport helicopter project is the need to purchase a rotorcraft already in production, rather than launching a clean-sheet development programme.

Maj Thomas Knäpper, Luftwaffe capability manager in charge of the programme, says only two heavy-lift helicopters effectively meet that requirement: the Boeing CH-47F Chinook and Sikorsky's CH-53K King Stallion – being developed for the US Marine Corps.

"We want to buy a product already on the market. You could assume that Bell Boeing would come back with the [V-22] Osprey, but it is not as big," he says.

Germany aims to take delivery of its first new helicopter in 2022, which means contract signature needs to take place in around 2018, says Knäpper. The service has defined its technical requirements for the programme, which should lead to the issue of a request for proposals in about 12 months' time, he said, speaking on the sidelines of the IQPC International Military Helicopter conference in London on 19 January.

No figures for the number of rotorcraft to be bought are available, but it is thought Berlin will look to match its current fleet of elderly CH-53G/GA/GS models. Flightglobal's Fleets Analyzer database records a combined 81 of the type as being in current active service. 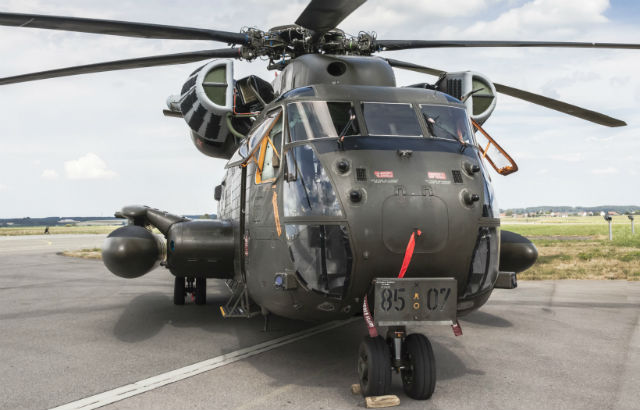 As the helicopter will be used to support special forces operations and combat search and rescue tasks, an aerial refuelling capability is required, he says. However, Germany presently has no tankers suitable for the role. Although it is a customer of the Airbus Defence & Space A400M, the tactical airlifter is unable to perform in-flight refuelling of rotorcraft.

But Knäpper believes Airbus will have to overcome the issues with its flagship turboprop. "We insist on it [in-flight refuelling], so they will have to deal with the problem over the next seven years," he says. If Airbus cannot provide the required performance level on the A400M, Berlin may instead have to rely on tankers from allies such as France or the USA.

"But if we integrate the equipment in the helicopters from the beginning, it makes it cheaper than doing it later," he adds.

German industrial involvement in the rotorcraft programme is unlikely to extend to the establishment of a local production line for whichever type is selected. Although the predecessor of Airbus Helicopters assembled the current CH-53s in Germany, its participation is likely to be restricted to maintenance and support activities.

"The number of helicopters [to be acquired] will be too low, so it will not be efficient to build a new assembly line in Germany," says Knäpper.