Airbus Helicopters has frozen the aeromechanical configuration of its developmental H160 medium twin, but admits that certification and service entry may need to slip into early 2019.

Since its first flight in June last year, the H160 has accumulated about 250h, says programme chief Bernard Fujarski.

Although it is still working towards EASA certification at the end of 2018, he says “it may require that we take some additional months and deliver the first aircraft in 2019” to ensure the maturity of the helicopter and its production and support processes.

Discussions are continuing with the H160’s launch customer about a “compromise” on the delivery schedule, he adds.

Changes to the configuration of the initial prototype include reshaped cowlings and air intakes, and a settled design of the rotor mast.

The latter has been particularly key to reducing vibration levels in the new helicopter, says Fujarksi; three different mast lengths were tested, with the airframer eventually settling on an intermediate design, he says. 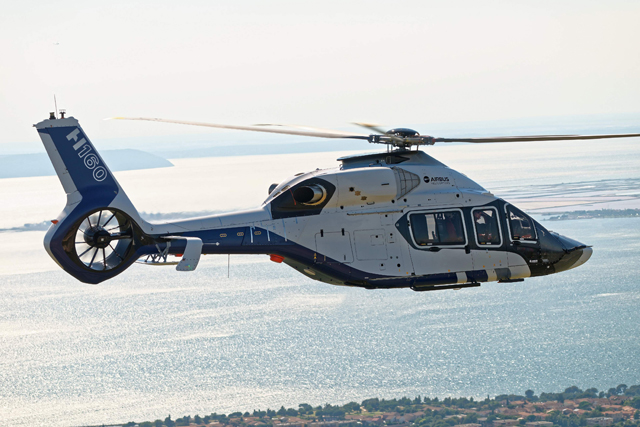 Overall vibration is at an “unprecedented” low level, he says, even without the use of any damping system. “We consider the H155 as a benchmark in our range, but the H160 is exceeding its performance in vibration. What’s amazing is that the vibration level is good whatever the flight profile.”

High temperature trials will be largely wrapped up in the coming weeks in the south of France using aircraft PT1, although certain tests will be repeated during 2017 using the production conforming design introduced early next year with PT3.

So far the helicopter has been exposed to temperatures above 38°C (100°F) and “as predicted we were within our margins for those parameters”, Fujarski says.

Both current prototypes are flying with the Turbomeca Arrano engine, but tests using fully calibrated engines should begin by September, he says, allowing the manufacturer to set the performance specification – including the crucial maximum take-off weight – towards the end of the year.