Bell Helicopter has taken the wraps off a new concept rotorcraft at this year’s Heli-Expo, designed to showcase the manufacturer’s renewed focus on innovation under the direction of chief executive Mitch Snyder.

Although never destined for production or even flight test, the Future Concept Helicopter – or FCX – features several technological advances that Bell believes will eventually be employed on its products.

Aside from its futuristic looks – which, curiously, resemble the early concept sketches for the X4 produced by what was then Eurocopter – the real leap forward is in the cockpit, where Bell envisages doing away with traditional controls – gone are the collective and cyclic levers and foot pedals – and display screens. Instead, the aircraft is highly automated and is flown via augmented reality projected on to a pilot-worn head-up display.

“We think it’s all going to be on a head-up display. That’s where we believe the industry is going,” says Scott Drennan, director of innovation at Bell.

“Let the computers do the dumb, dirty and dull. We are talking about an aircraft that’s controlled through augmented reality.”

In a further twist, the cockpit is configured for only single-pilot operation, with a centrally mounted seat. 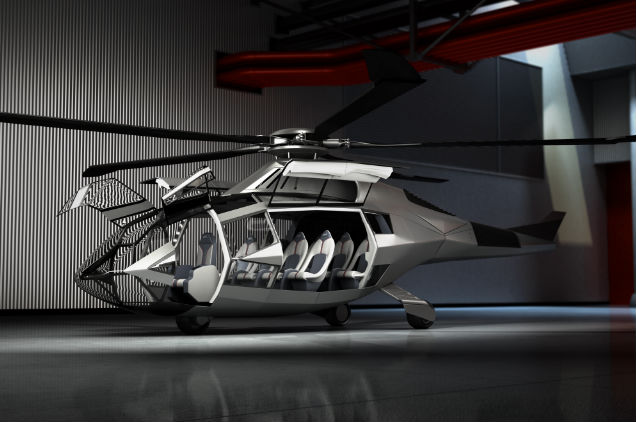 The biggest visible difference to the helicopter’s exterior is the lack of a tail rotor, which both saves weight and improves external safety. Anti-torque control is provided by what Bell calls a “cross-flow fan” – a series of electrically driven fans mounted in the tail boom.

Although Bell sees power for the main rotor as still being provided by a pair of conventional gas-turbine engines, Drennan says the design “looks to be the quickest way to chase down hybridisation on a traditional platform”.

The system lends itself to hybrid power, he notes, as electric motors prefer to run at the higher speeds required.

In addition to the basic anti-torque function, the cross-flow fan provides a degree of thrust vectoring, allowing the removal of stabilisers on the tail boom. Weight is saved by the lack of transmission or gearboxes required to power a tail rotor.

Bench tests of a version of the cross-flow fan and an electric power system have already begun, says Drennan, but scaled for a helicopter the size of a “long, light single”.

The 16in (40cm)-diameter fans developed so far have good thrust per horsepower, he says, “values which make us think it’s viable”. The next step will be to work with an engine manufacturer to integrate the hybrid system, he says.

Bell investigated the possibility of using an electrically driven conventional tail rotor – whether open or shrouded - but, Drennan says, “we thought that for a future vision we would like something that takes that completely off the table”. 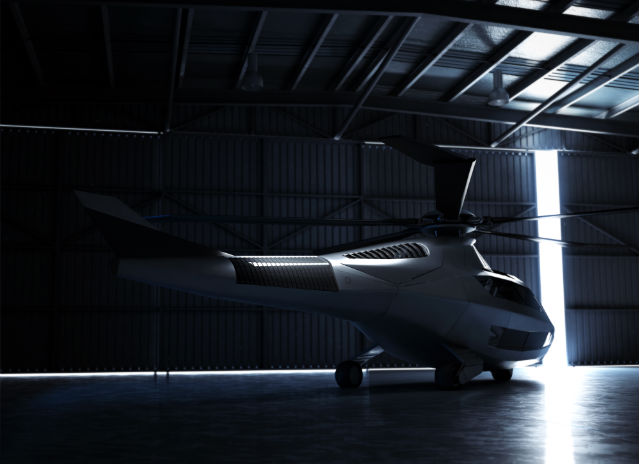 Although at first glance the main rotor appears normal, albeit with swept-back blade tips, here too Bell proposes an innovative solution.

Instead of blades permanently fixed in one configuration, Drennan says it is investigating the use of “morphing” technology to allow the blade tips to be moved depending on the flight phase.

Bell has a history of “transformative” aircraft, he says, pointing to its multiple tiltrotor developments. “We want to leverage that history, but instead of configurational changes we want to look at detailed morphing technology.

“Can we get the geometry of the blades to change in flight? That way would get more efficiency in the hover, but in forward flight could change them by sweeping them back a little bit.”

It is, he says, “another exercise in advanced actuation”. That principle can also be applied to the engine air intakes, which, if the pilot could alter their size or orientation in flight, might yield better engine performance, he suggests.

The overall look of the FCX is striking, a conscious decision by its designers to “distance ourselves from the current aesthetic”, says Levi Bilbrey, Bell senior brand strategist.

“The styling is more reminiscent of a luxury sports car while still keeping it sleek and aerodynamic,” he says.

In terms of size, the concept model is slightly longer and wider than the current 412 and is sized for eight passengers, “but it’s about what we are cuing up for the future,” says Drennan, referring to the concept as a “new medium twin”

Bell’s renewed focus on innovation is, Snyder says, an attempt to reconnect with the company’s proud history of aviation milestones.

“Our legacy has always been innovation – look at the firsts we have pioneered. Let’s embrace that past and bring it in to today and drive it in a different direction,” he says.

The FCX is designed to showcase the ideas it is working on, offering “a glimpse of what we are doing behind the scenes”.

“It is different, but it’s a different Bell,” he says.

The concept is about pushing both the industry and Bell to “take it to a new level” and about imagining the future 15-20 years away. “Unless we are putting our money into it now, it won’t be ready then,” he notes. 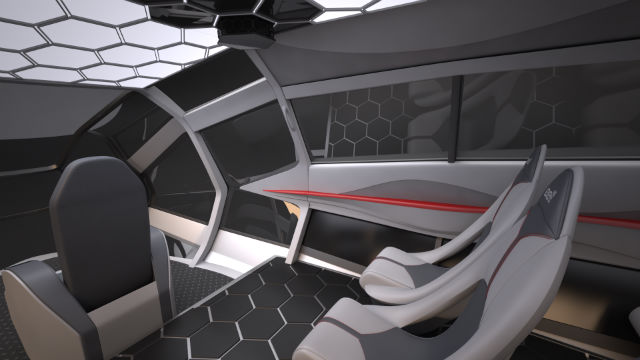 FCX was born from an innovation team set up by Snyder about 12 months ago with the express intention of breaking down barriers between the occasionally opposed design and engineering departments.

Drennan says his team’s mission is to “explore, experiment and exploit”.

“Let’s explore the physics of the technology out there, let’s experiment with them and let’s exploit them,” he says.

If you strip out the slightly hyperbolic language, what Drennan means is that the innovation team is there to identify problems or solutions, rapidly build concepts and bring them to a high technology readiness level.

Key to the effort, however, was getting the two departments – specialists in distinct disciplines – to work hand-in-hand.

“It turns out that engineers need a push towards the sci-fi and the creative folks need a push the other way [in order to] to build an aircraft that’s safe and functional,” says Drennan.

Bilbrey, meanwhile, comes from the more creative side of the fence. He says there was a “little bit of hesitancy” from both groups initially, but that quickly evaporated.

“We moved a little closer to the engineering position and they moved closer to what looks aesthetically pleasing,” he says.

The eventual FCX mock-up was one of Bilbrey’s “top two” from the dozen different designs drawn up by the group.

“The other was more angular but Scott’s team said ‘we can’t make things like that’.”

Other concepts included co-axial rotor-equipped helicopters all the way up to “something that looks like Boba Fett’s spaceship”.

His only disappointment, he says, was that his idea for the rotor blades was not used. “I thought it was going to get a really cool design I sketched out on a napkin one day,” he says, slightly wistfully.