Helicopters: the crack troops of the war on wildfires

They may not have the awesome dumping power of fixed-wing water bombers such as the Boeing 747, De Havilland Canada CL-415, or the Lockheed Martin LM-100J, but in the ever-more consuming war on wildfires the rotorcraft is often the key tactical weapon, able to take on its payload from local sources, get to a blaze swiftly and repeatedly, and attack from close range with precision. 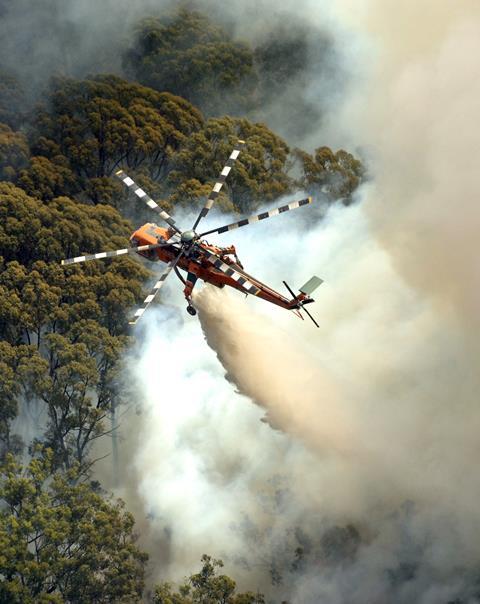 Helicopters played a crucial role in this summer’s campaign against devastating fires on the US West Coast and are likely to be in the thick of the action again during the season in Australia and elsewhere in the Southern Hemisphere, where out-of-control burning brush is an ever-present hazard for hundreds of thousands of homeowners.

One of the leaders in the market is Erickson. The Portland, Oregon-based manufacturer and operator of the S-64 Air Crane – it took on the S-64 type certificate from Sikorsky in 1992 – claims to have “invented the art of firefighting from the sky”. Some 49 of the heavy lift type are in service around the world, including 18 with Erickson itself.

With a capacity of just over 10,000 litres (2,650USgal) and ability to drop 95,000 litres an hour, the Air Crane, says Brittany Wise, senior vice-president of sales, business development and marketing, combines “the capacity of a fixed-wing tanker with the accuracy, technique and refill speed of a helicopter”.

Erickson’s legacy is logging operations in the Pacific northwest, and it bought the S-64 programme to become “vertically integrated”, says Wise, although it has since successfully marketed the type to operators around the world. “The fact that the Air Crane was built to lift heavy things, not carry people, sets it apart. It is the only heavy lift helicopter designed specifically for firefighting,” she says.

The fact that Erickson flies its own product gives it “operational experience to innovate on the Air Crane”, says Wise. “We have an in-house engineering team that allows us to adapt.” One of these developments is a new composite rotor blade, a project that the company had been working on since 2008 and first flew on an S-64 in 2016.

The blade was certificated by the US Federal Aviation Administration earlier this year. The replacement of the existing aluminium blades is expected to increase lift capacity in most flight conditions, including a 1,350kg (3,000lb) boost in hot and high conditions, says Erickson. The development will also lower maintenance costs by 75% and fuel consumption by 3%, predicts the company.

The composite blades are part of an S-64+ upgrade kit that Erickson is soon to roll out, along with its latest production variant, the S-64F+, which will include Matrix flight control software from Sikorsky that will make it easier for operators to fly at night. The danger of operating in darkness is one of the biggest barriers to round-the-clock aerial firefighting.

The solution, which Sikorsky and Erickson signed a development agreement for at the beginning of this year, uses Lidar and algorithms to detect obstacles the human eye cannot see, and recommend a safe passage to the pilot, says Sikorsky, which adds: “Our goal is to dramatically reduce instances of controlled flight into terrain, which is a leading cause of helicopter accidents, especially at night.”

Matrix integration is “progressing rapidly” with “prototype hardware mechanical design in full swing”, says Wise. “The next milestone we will see is the completion of all systems architecture design and full characterisation of our current hydraulic flight control system. We are marching towards wheels off ground in 2021.”

While Sikorsky is partnering with Erickson on the Matrix avionics upgrade and was the original developer of the S-64, the Lockheed Martin subsidiary is a major player in the firefighting market in its own right with the Firehawk, a variant of the UH-60 Black Hawk military transporter and utility helicopter that Sikorsky developed initially for major customer Los Angeles County in the late 1990s.

“At the time we hadn’t even considered it for a civilian version,” says Jeanette Eaton, vice-president strategy and business development at the helicopter manufacturer. However, Los Angeles County fire chiefs were convinced that a battle-proven military design able to withstand austere conditions was exactly what they wanted.

At Heli-Expo in Anaheim in January this year, a trio of Sikorsky’s latest generation S-70i Firehawk were on display, operated by three Californian agencies, including the Los Angeles County Fire Department. Five organisations based on the West Coast deployed a total of 12 S-70is this fire season, and the biggest operator, Cal Fire, intends to acquire 12 over the next three years.

Improvements on the new variant include a 3,790-litre Kawak Aviation Technologies external water tank, wider chord rotor blades, and added power from the twin GE Aviation GE-701D engines. Other changes include a retractable snorkel suction method that allows the tank to be filled in 45sec as opposed to 60sec previously. The aircraft now offers up to 4g manoeuvrability.

So far, sales of the Firehawk, which is modified for Sikorsky by Air Methods company United Rotorcraft, have been restricted to the USA. However, with 56 legacy Black Hawks involved in firefighting around the world and 3,600 military variants in service in 30 countries, Eaton believes the type has significant export potential.

Another US manufacturer, Kaman, believes that night firefighting in a restricted airspace could be one of the missions for which an in-development unmanned version of its K-Max medium-lift helicopter could be suited. The Connecticut-based company hopes to offer a kit to convert manned versions of the type next year, says Romin Dasmalchi, senior director of business development.

One of the most widely used rotorcraft for firefighting is the Russian Helicopters Kamov Ka-32, with its distinctive coaxial rotor design. Some 240 examples of the “flying crane” are in service around the world including 60 of the European-certificated Ka-32A11BC. Among the firefighting users of the type outside Russia are the South Korean forest service, Babcock in Spain, and Everjets in Portugal.

The latest Ka-32A11BC comes with 90 optional equipment items, says the manufacturer, including the Simplex system, SEI Industries’ BambiBucket, and a water cannon, and, depending on the configuration, can carry up to 5,000l of water. Crews can also use night vision goggles to allow night missions.

The advantages of a helicopter over a fixed-wing water bomber include being able to hover over a fire and discharge with a high degree of accuracy, as well as being able to take on water from “nearby bodies of water of practically any size”, says Russian Helicopters. Rotorcraft have the added capability of being used in urban areas, especially combatting high-rise fires.

The Ka-32 is not the only Russian helicopter pitched at the sector. Earlier this year, Russian Helicopters launched a test programme to assess the suitability of the Mi-8/171 family for firefighting in the Borneo region of Indonesia. The medium twin is one of the most popular helicopters made in Russia and the former Soviet Union, and is in service in over 50 countries.

Finally, Leonardo Helicopters remains another significant contender in the market. Miami-Dade Fire Rescue in Florida in October took delivery of the first of four AW139s for fire suppression as well as emergency medical services and search and rescue. The aircraft come with a cargo hook, rescue hoist and Bambi Bucket, and the remaining three examples are due for delivery by year-end.