Japanese researchers are studying a new design for a high-speed compound helicopter that could reach speeds of up to 270kt (500km/h).

The concept, being developed by the Japan Aerospace Exploration Agency (JAXA), features a pair of small ducted fans installed on the tips of short, downward-angled wings. 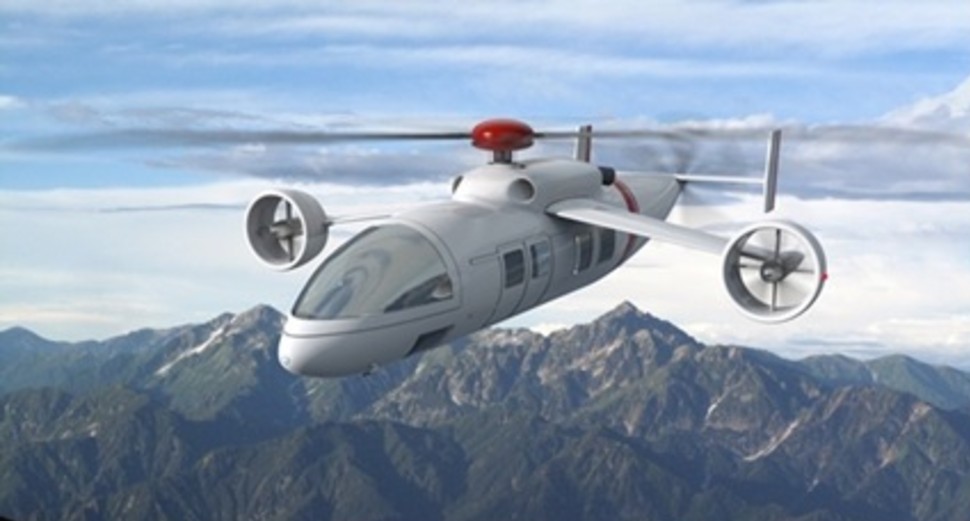 Unlike the large wing-mounted pusher-propellers featured on designs like the Airbus Helicopters Racer, the electrically-powered fans are predominantly to provide anti-torque and directional control, says JAXA.

"Compared to conventional tail rotor anti-torque devices, the roll attitude of the helicopter can be kept level in hovering," the agency says.

JAXA says that in the final design the fan ducts may be removed to reduce drag.

Although the fans might "contribute" to high-speed flight, the main propulsion will be provided by a tail-mounted pusher-prop, powered by conventional turboshaft engines.

In addition, the wing provides 70% of lift during forward flight, the agency says. Full-length flaps are installed on the structure to lessen the effects of rotor downwash during the hover.

JAXA says its target is to "demonstrate technologies to achieve a target maximum speed of 270kt" and to achieve "doubled speed with doubled power".

"Generally, if you want to reach a speed that is twice as fast, you will need eight times the propulsion power if the drag co-efficient of the aircraft remains the same," the agency says.

Managing the relatively high advance ratio – forward speed compared with the rotor blade tip speed – of 0.8 will also be a challenge, says JAXA.

JAXA in 2014 performed flight tests of a one-seventh scale model, which used a similar configuration, and found that it could cope with the same advance ratio using "only the rotor pitch controls".

Flight trials to test the new technologies using the scaled models will be held over the next three years, says JAXA.

Although no full-size technology demonstrator is currently planned, JAXA hopes that this may change.

Commitments from airframers "or other potential users" would be required "before we seriously considered allocating budget", the agency says.

JAXA is seeking a "smooth channel" to transfer the technologies and analysis software developed during the project to industry.

"The greatest pleasure for the researchers is that their work can serve society in the end."