The service on 12 January said a USAF pararescue team stationed on the Horn of Africa was called to evacuate two soldiers from a local partner force who had sustained unspecified injuries. The pararescue team deployed in the USAF’s new Sikorsky HH-60W Jolly Green II combat rescue helicopters, marking the first known real-world operation for the type. 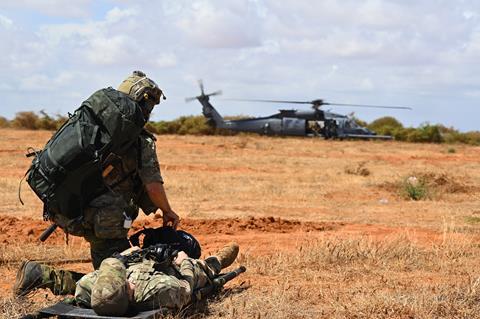 A US Air Force pararescueman moves a simulated casualty to a waiting Sikorsky HH-60W Jolly Green II combat rescue helicopter during December exercises in eastern Africa. The new rescue helicopter is on its first operational deployment to the region

“The initial pick-up of the injured was quick, and the team was in and out of the area without incident,” says the USAF’s 435th Air Expeditionary Wing, a Germany-based unit that provides air support to military operations in Africa.

”[The team] immediately made for the nearest medical facility for trauma surgery while the pararescuemen performed their own stabilising emergency medical care in the aircraft’s cabin,” the wing adds.

The milestone comes during the HH-60W’s first deployment to eastern Africa, the USAF says.

While not specifically mentioned, the US military’s main operational hub in the region is Camp Lemonnier in Djibouti – Washington’s largest outpost on the continent. The 435th Wing’s website lists several of its subordinate units, including personnel recovery teams, as being assigned to Lemonnier.

Working with the December HH-60W CSAR flight, according to the USAF, was a Lockheed Martin HC-130J Combat King II, the personnel recovery variant of the venerable C-130 turboprop cargo transport.

The HH-60W, whose Jolly Green II namesake nods to the Vietnam-era Sikorsky HH-3E Jolly Green Giant personnel recovery helicopter, is the US military’s only dedicated CSAR helicopter, according to Sikorsky.

The Lockheed Martin subsidiary assembles HH-60Ws at its flagship plant in Stratford, Connecticut.

The rotorcraft manufacturer says it designed the type specifically to fill the CSAR mission role, which entails flying into contested or even enemy-controlled territory to evacuate wounded personnel or recover downed aviators.

“While personnel may be behind enemy lines, or far from needed support, this team is equipped to travel great distances and fight their way in and out if necessary to make the mission happen,” says Lieutenant Colonel Thaddeus Ronnau, commander of the personnel recovery task force assigned to the Horn of Africa.

The Jolly Green II is replacing the current air ambulance, the HH-60G Pave Hawk. While both types are based on Sikorsky’s proven UH-60 Black Hawk airframe, the USAF says the Pave Hawk is a “highly modified” H-60, while the Jolly Green II was built specifically for its CSAR mission. 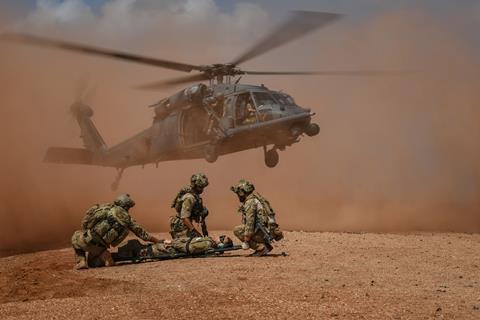 Pararescue forces prepare to load a simulated casualty onto a Sikorsky HH-60G Pave Hawk in Africa. The USAF is in the process of replacing the Pave Hawk with the HH-60W, a platform purpose-built for casualty evacuation

The service declared initial operational capability (IOC) for its HH-60W fleet in October 2022. The designation indicates the USAF possesses enough functional Jolly Green II airframes, logistics requirements and trained operators “to support a 30-day deployment to any independent location with a package of four aircraft”, according to the USAF’s Air Combat Command (ACC).

The HH-60W offers “a range of improved capabilities over its predecessor”, according to the ACC, including increased range and survivability, a new fuel system and upgraded avionics. The Pave Hawk entered active service in 1982.

The USAF says the HH-60W’s expanded range capability is already proving its value.

“By bringing the team directly to the location, the HH-60W can shorten the time required to rescue an isolated and/or wounded individual,” the Africa personnel recovery task force notes.

“Even in the vast expanses of Africa, this combined team was able to pull a critical patient from the battlefield with the air force’s newest rescue vehicle and place them in the hands of skilled trauma surgeons, ultimately saving two lives,” Ronnau says.

Although the US Department of Defense (DoD) maintains operations across the African continent, the infrastructure footprint and number of personnel involved are relatively modest and often dispersed over large geographic areas.

This has created challenges for casualty evacuation in Africa, where flight times to some locations are measured in hours. In 2017, four US Army Green Berets were killed and two wounded in Niger when the Nigerien force they were advising came under ambush by militants affiliated with the group Islamic State.

A subsequent investigation of the incident revealed a casualty evacuation aircraft did not reach the American team until nearly 6h after the ambush began – well outside the so-called “golden hour standard” of 1h evacuations for wounded service members in Iraq and Afghanistan.

Prompted by that deadly incident, the DoD’s Africa Command (AFRICOM) has since claimed to have reduced casualty evacuation times. In addition to internal changes, AFRICOM maintains contracts with several private airlift firms to support rotary and fixed-wing evacuation services.

Sikorsky says it has delivered 24 HH-60Ws to the USAF. The service plans to procure a total fleet of 113 Jolly Green IIs for the combat rescue helicopter programme.