KAI in contract to develop MUM-T for Light Armed Helicopter

Korea Aerospace Industries (KAI) has entered an agreement for the development of manned-unmanned teaming (MUM-T) for the Light Armed Helicopter (LAH). 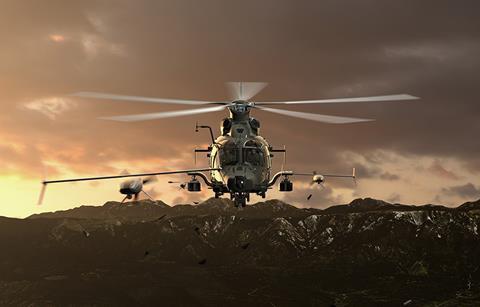 An artist’s depiction of an LAH launching UAVs

The technology to be incorporated is aimed at improving the LAH’s situational awareness through tight integration with UAVs. Using artificial intelligence, the system will detect changes in the battlefield, which can improve a pilot’s decision making.

At the that time, it said MUM-T would be integrated into both the LAH and Surion, including the development of small scout UAVs deployed from helicopter-mounted canisters.

In a 2020 promotional video, a LAH is depicted launching four UAVs. In addition to locating an enemy air defence radar, one of the UAVs performs the role of a loitering munition, attacking and destroying a high-threat enemy vehicle carrying surface-to-air missiles.

“Despite competition with foreign models, we were able to sign the contract because of the [Surion’s] excellent performance and perfect mission capability,” says KAI.