Kaman is to end production of its distinctive K-Max on the back of low demand and low profitability for the single-engined heavy-lifter.

Announcing the decision on 18 January as part of a broader company-wide restructuring, Kaman said it will deliver the final K-Max this year. 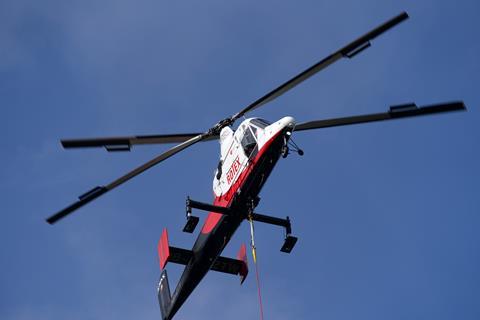 Kaman says that given “low demand and variation in annual deliveries, coupled with low profitability and large working capital inventory requirements” the helicopter “does not deliver the most compelling growth opportunity for Kaman going forward.”

With its distinctive synchronous intermeshing twin rotors, the K-Max boasts an impressive 3,175kg (7,000lb) maximum take-off weight – or 5,443kg with an underslung load – contributing to its popularity in industries such as construction, forestry and firefighting.

However, that has not translated into significant sales: Kaman says just 60 units have been handed over since the first delivery in 1994.

Cirium fleets data lists just three examples on order – two for operators in the USA and one to an Austrian firm – plus 38 K-Max in service.

In addition to the baseline helicopter, Kaman also offers an unmanned variant called the K-Max Titan, derived from a version demonstrated by the US Marine Corps in Afghanistan. Production of this model will also end this year.