Leonardo Helicopters is continuing to pursue incremental upgrades for its AW189 super-medium-twin as the manufacturer looks to cement the 8.6t rotorcraft’s market-leading position.

In addition, the airframer is waiting to deliver the first example of the K-model variant, which features a pair of Safran Helicopter Engines Aneto-1K turboshafts rather than the standard GE Aviation CT7s. 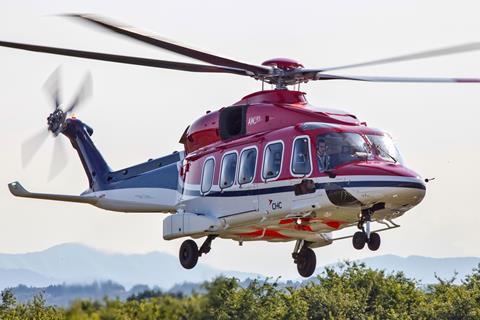 Super-medium helicopters bridge the gap between medium-class models like the AW139 and Airbus Helicopters H160, and heavy-twins such as the Sikorsky S-92. Their manufacturers had predicted an order boom on the back of a strong oil and gas sector, but an offshore downturn has been reflected in slow sales.

Nonetheless, with over 70 units in service, the AW189 maintains a comfortable lead over its only current rival, the Airbus Helicopters H175, of which 43 examples have been delivered, Cirium fleets data records.

In a Covid-affected 2020, Leonardo Helicopters delivered five AW189s, while there were six shipments of the H175.

In early March, the Italian airframer gained European certification for the Phase 7 avionics update on the AW189, which integrates the latest FADEC software for the CT7 engines, plus adds real-time data transmission.

Andrea Bernascone, AW189 product marketing and sales engineering lead, says the Phase 7 enhancement is “something that we believe will massively increase the efficiency of the AW189” and help to cut maintenance costs.

A further milestone is also being targeted with the delivery of the initial AW189K to launch customer Gulf Helicopters of Qatar.

Certification for the variant was obtained last year, and service entry was supposed to follow in the second half of the year. However, the coronavirus pandemic appears to have knocked the timing; Leonardo now offers no guidance on when the first shipment is likely to take place. 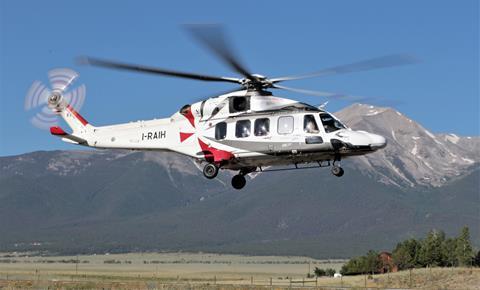 Recent images of that helicopter posted on social media show it performing check flights in Italy. It is in Gulf Helicopters’ livery but still bears its Italian test registration (I-RAIU).

But having registered just that solitary order from Gulf Helicopters since its 2017 launch, the AW189K has yet to gain sales momentum.

Bernascone remains unconcerned, however, noting that the manufacturer is “receiving a lot of interest”, despite the “strong competition” and “tight market”.

“We are extremely optimistic. We are receiving lots of interest – enough to make us optimistic for the future.”

He says that the additional power provided by the Aneto-1K engines – 2,500shp (1,800kW) versus 1,870shp for the CT7 – will appeal to those operators for whom hot and high performance is key.

The Aneto is not a replacement for the GE powerplant, he stresses, but simply “is providing the market the possibility to select the right engine for the mission.”

Although the AW189 has so far seen off the threat from the 7.8t H175, it will face additional competition in the coming years with the arrival, likely in 2022, from Bell’s larger 525 Relentless.

“This is quite a tight market and it is quite a small market and another competitor could have strong effects on market share,” says Bernascone.

He notes the new capabilities promised by the 525, in particular its fly-by-wire controls – a first for a civil helicopter – but says the new rotorcraft’s service entry will be the key test.

“It will come to the market and we will see in reality what kind of capability it will deliver.

“It is coming into a market right now that is really ruled by efficiency and cost-effectiveness. Will it be as cost-effective and efficient as the AW189?” 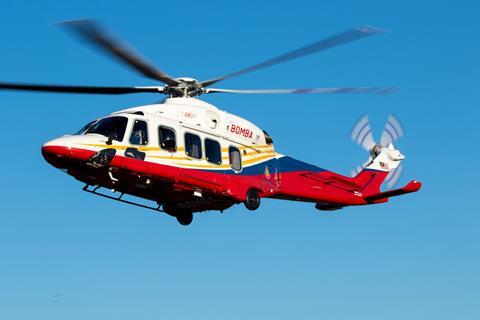 Meanwhile, the airframer has raised the possibility of resuming assembly of dedicated search and rescue (SAR)-roled AW189s at its Yeovil production plant in the UK.

The site previously built 10 examples for operation by Bristow Helicopters on its SAR contract with the Maritime and Coastguard Agency (MCA), the last of which was delivered in 2018.

But with the MCA now beginning the tender process for the next-generation of that contract, so-called SAR2G, Bernascone says that the helicopters could once again be assembled in Yeovil if selected by bidders.

“We already did it in the past,” he says, although says that any such arrangement would “depend on numbers”, the plant has the “capability to do it”.

Elsewhere, however, the airframer has paused plans to build AW189s at the HeliVert factory near Moscow.

HeliVert, a three-way venture between Leonardo Helicopters, Russian Helicopters and oil company Rosneft, had been due to fabricate AW189s for the energy giant’s RN-Aircraft subsidiary as part of a 2014 framework agreement for up to 160 examples to be delivered by 2025.

However, just 10 AW189s are currently flown by Rosneft or RN-Aircraft, production data indicates.

Leonardo Helicopters says the long-term ambition for HeliVert has not changed but that local assembly “is purely market driven”.

“For the time being we do not consider this as a priority,” says the company.

This article has been edited to correct the engine type in the second paragraph. In additon, delivery figures for the H175 in the fifth paragraph have been corrected.