Leonardo Helicopters’ UK arm believes it can still play a part in the replacement of the Royal Air Force’s Puma HC2 fleet, despite signaling that the Ministry of Defence (MoD) is keen to look at high-speed designs in the future.

With the fleet of medium-lift Puma transports due for retirement in 2025, Leonardo Helicopters has previously proposed the 9t-class AW149 as a replacement, promising final assembly would be located at its Yeovil facility in southwest England. 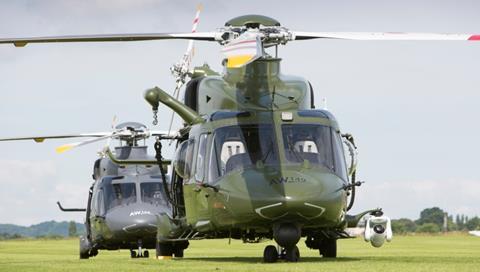 9t-class AW149 has been proposed for Puma replacement

But on 14 July, minister for the armed forces James Heapney signed a broad modernisation co-operation agreement with US secretary of state for the army Ryan McCarthy.

Included within that is confirmation of the UK’s interest in Washington’s Future Vertical Lift (FVL) programme, to create “closer affiliation in the development of helicopter capability”.

The UK was already known to be one of several nations with observer status in FVL, but this is the first time the MoD has directly referenced its interest.

Although there have been suggestions that the Puma’s out-of-service date could be extended, the first examples of the medium-class Future Long-Range Assault Aircraft (FLRAA) – one of two separate developments within FVL – are not due to enter service with the US Army until 2030 at the earliest.

Leonardo Helicopters UK, whose Westland predecessor built the Pumas, believes it would be hard to further postpone the retirement of what is already “a 50-year-old aircraft”.

The airframer says it is “aware of the UK MoD’s review of a future medium-lift capability”, but stresses that as the country’s “only onshore OEM” it is “well placed” to support the options being explored. 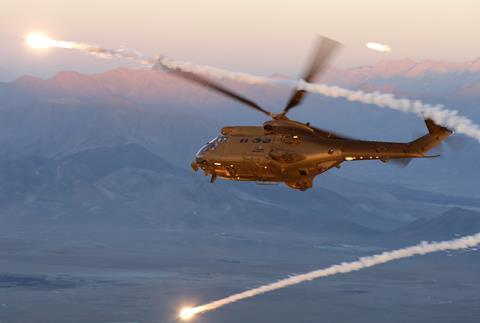 Puma fleet is scheduled for retirement in 2025

“Leonardo is continuing to invest in future skills and technologies especially related to unmanned air systems and future fast rotorcraft,” it says, pointing to its “strategic partnering arrangement” with the MoD.

Describing the AW149 as an “established capability” within its portfolio, it says the helicopter would help address the UK’s “short- [to-] medium-term requirements for a medium multi-role platform”.

“[The AW149] could be an ideal solution for the UK – not just from a capability perspective, but also the value to UK Plc in support of ‘Build Back Better’,” – a reference to the government’s coronavirus economic recovery plan.

To date, only the Royal Thai Army has ordered the AW149, although there have been reports that Egypt is also negotiating a deal for around 20 examples.

Previously UK defence officials have evaluated the possibility of extending the Puma’s service life to 2035, to coincide with that of the Royal Navy’s AW101 Merlins in 2035, enabling both types to be replaced with a common platform.

The US Army has two active programmes under the FVL initiative, each with two contenders. FLRAA is a contest between the Bell V-280 Valor and Sikorsky-Boeing SB-1 Defiant to build a replacement for the Sikorsky UH-60 Black Hawk. Meanwhile, Bell’s 360 Invictus is competing against Sikorsky’s Raider X for the Future Attack Reconnaissance Aircraft armed scout helicopter requirement.

V-280 is one of two contenders for FLRAA requirement