The deal is worth Ps32 billion ($623 million), and was signed with Sikorsky’s PZL Mielec unit on 28 December 2021, says defence secretary Delfin Lorenzana in a Facebook post. 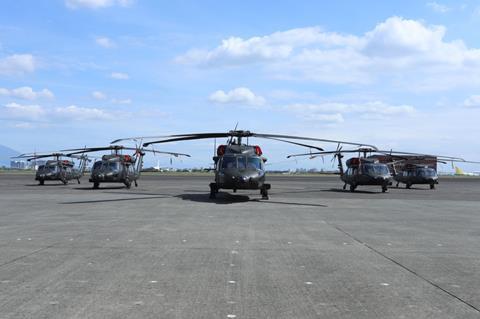 The package also includes training for pilots and maintenance personnel, and the formal contract is being drafted, which will be followed by a ‘Notice to Proceed’, which will kick off the project.

“The lack of transport planes and helicopters have never been more acute during the pandemic and in the aftermath of Typhoon Odette,” writes Lorenzana.

“This was exacerbated by our aging [Bell UH-1] Hueys that have become uneconomical to maintain.”

Typhoon Odette – the local name for Typhoon Rai – was a powerful typhoon that slammed the Philippines in December 2021, causing considerable loss of life and damage.

Lorenzana adds that Manila’s existing fleet of Black Hawks have performed well in the aftermath of this event, and amid the broader coronavirus pandemic.

Manila operates 15 Polish-built S-70is, with the last five examples having been delivered in November 2021. The fleet originally numbered 16 examples, but one was lost in a crash.