Marenco Swisshelicopter is contemplating a twin-engined successor to its developmental SKYe SH09 light single, even as it works towards restarting flight tests of the new type.

An initial test campaign with the first flying prototype of the 2.6t SH09 lasted from October last year until the first half of 2015, with several hours of flight up to translational speed. Airborne evaluations were then paused in order to concentrate resources on the development of the second helicopter.

Production of components and major fuselage structures – for assembly at Marenco’s Mollis facility – of the second flight-test article is under way, including a key modification to the bearing-free rotor head. Martin Stucki, chief executive of the Pfäffikon-headquartered manufacturer, says even before Marenco flew the first iteration of the part, it knew it would require modification. "What we wanted to achieve from the redesign was a stable design and reduced complexity of the component," he says.

The second prototype is due to fly "most probably" at the end of 2015 or the beginning of 2016 and, subject to successful validation, the change to the rotor head will then be installed on the earlier helicopter. 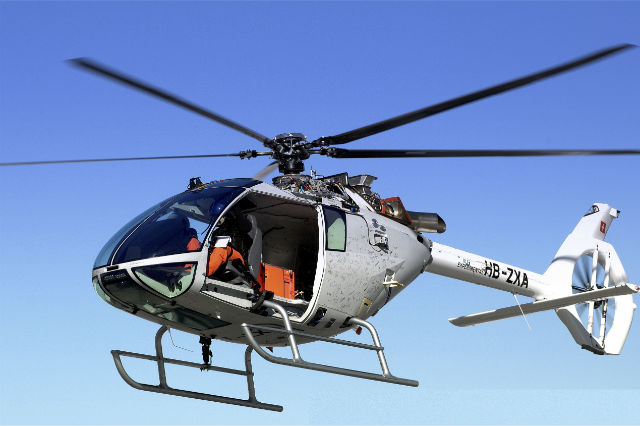 A third flying prototype, likely to roll-out in 2016, is designed to be close to the eventual production standard, says Stucki, although the exact timing will depend on how many certification points can be addressed with the earlier examples.

Certification and service entry is likely in late 2016 if everything “goes extremely well”, or 2017, he says, a slippage from the initial 2015 target.

Further out, Stucki says the next logical step would be a twin-engined model.

"What we can visibly develop is a twin, and if we go for that it would be a high-performance twin."

The airframe already has sufficient space for an additional engine, he says, aided by the small footprint of the 1,020shp (760kW) Honeywell HTS900-2 that powers the SH09.

"We can easily go to a twin," says Stucki, "although another option is a high-performance flying crane with an engine upgrade.