Milestone stimulates secondary market for S-92, as it looks to follow success of H225 repurposing

Helicopter lessor Milestone Aviation is attempting to create new markets for the Sikorsky S-92 as it begins “lifecycle planning” for its fleet of over 80 examples of the heavy-twin.

In doing so, it hopes to emulate the success it has seen in repurposing former oil and gas-roled Airbus Helicopters H225s, alongside operator Air Center Helicopters (ACH). 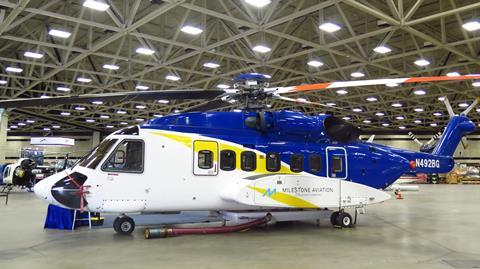 Although the Irish lessor’s S-92’s are relatively young, it is looking several years into the future, says Pat Sheedy, Milestone chief executive.

Milestone has an 82-strong fleet of S-92s, the majority of which are flown in the offshore transportation segment in support of oil and gas operations, with a smaller number used for search and rescue missions.

“It is necessary to start developing that secondary mission. We have a pretty young fleet of S-92s, but we do need to create that channel for older aircraft to leave their primary mission – it’s about managing that fleet,” says Sheedy. “It is about us starting to look at lifecycle planning for the S-92.”

The first output from the initiative is a firefighting variant which has been developed in conjunction with Helitak and was displayed at the recent Heli-Expo event in Dallas. That aircraft (N492BG) features a 4,000 litre (1,000USgal) fire-suppression system.

While Sheedy says “ideally we will not be putting huge numbers of these aircraft into that [firefighting] market over the next 12 months”, he stresses the importance of stimulating demand for new roles now.

In addition to firefighting, Sheedy sees potential for the S-92 to take on some of the personnel transport or utility operations being flown for agencies such as the UN or World Food Program. At present, many of those services are contracted to Russian operators or those using Russian equipment such as the Mil Mi-8, but it is unclear how long those will remain viable in the current circumstances.

Sheedy sees parallels between its plans for the S-92 and the previous repurposing of the H225 heavy-twin, significant numbers of which exited the oil and gas market following the type’s grounding in the wake of a fatal accident in Norway in 2016. 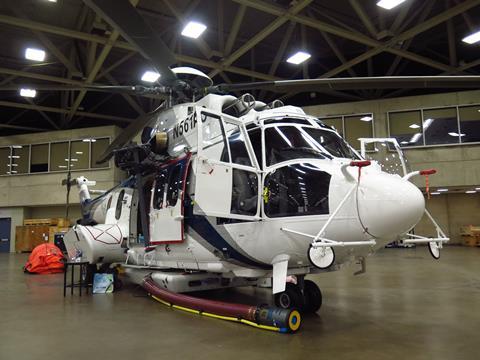 ACH has built up substantial fleet of H225s

Milestone worked with the aircraft manufacturer and operators, in particular US firm ACH, to develop alternative roles for the Super Puma.

Texas-based ACH also had a firefighting H225 (N561AC) on the Heli-Expo show floor, a variant that has been in development for three years, says Jesse Naiman, manager of the operator’s fire/utility aircraft progamme.

“We didn’t want to do it fast, we wanted to do it right,” he says. Modifications include a 4,000 litre tank and dispensing system from Helitak, nose-mounted mirrors, and internal troop seats, which are covered by the firm’s own supplemental type certificates.

Future additions to the former Era Group-owned asset will include a forward-looking infrared camera and an Astronics-supplied enhanced vision system, aiding operations in heavy smoke.

Further enhancing its appeal is the fact that the H225 is a standard- rather than restricted-category aircraft, unlike firefighting versions of the Sikorsky UH-60 Black Hawk, says Naiman.

Firefighting support is the latest role for ACH’s H225 fleet, which also performs personnel recovery missions, logistics support for the US Navy, and tactical training, among others.

By the end of 2022, ACH will have 27 Super Pumas on its books. The investment in the H225 is the brainchild of chief executive Rod Tinney, who saw the opportunity to acquire keenly priced examples when it became apparent only a fraction of the grounded fleet would return to oil and gas operations. “I was going to bet the farm,” he says.

ACH acquired the assets as “we needed the payload and the range [of the H225] and because nobody else in the world wanted them we could acquire them at a price our customers could afford”.

Tinney says he was never in any doubt that the aircraft could be a success in its new role. “It was the only aircraft that could fulfill the requirement but no-one believed we could convert it from oil and gas.”

ACH owns eight of the H225s, with the remainder of its fleet leased from Milestone.