A software shortcoming caused a search and rescue helicopter to behave like a “nodding dog” as it performed a series of uncommanded pitch oscillations, UK investigators have determined.

In its final report into the 30 July 2021 incident, the Air Accidents Investigation Branch (AAIB) says the Leonardo Helicopters AW189 (G-MGCT) cycled through repeated pitch changes of up to 20° after its pilots selected particular SAR modes in the automatic flight-control system (AFCS). 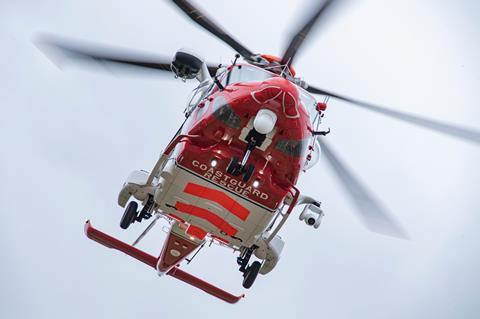 AW189s are used for SAR missions in UK

In that instance, which took place during a training flight off the southwest coast of Scotland, its crew was attempting to replicate behaviour the co-pilot had experienced on a similar sortie earlier that month.

“Owing to concern of the hazard that this flightpath behaviour may present in a degraded visual environment, the crew decided to fly the same profile and configuration in day VMC [visual meteorological conditions] to see if the unexpected flightpath oscillations re-occurred,” says the AAIB.

Following the completion of training tasks, the crew set-up the helicopter for a flight management system-directed sector search pattern – a SAR-specific function – at 1,000ft. As soon as the pilot monitoring selected the transition down mode, which triggers an automatic descent to 200ft above ground level, on the AFCS “the aircraft began to oscillate in pitch”.

“On recognising the unusual flightpath behaviour of the aircraft, the pilot flying deselected the autopilot modes and returned the aircraft to normal stabilised flight,” the AAIB says.

Subsequent analysis of the flight-data recorder showed the AW189 pitching up to a maximum of 12°, then shifting to 3° down before the helicopter was returned to level flight as the crew took manual control.

Similarly, data for the 5 July incident showed the “helicopter entered a cycle of pitching up and down manoeuvres, with the biggest transition being from 6.9° nose down to 17.1° nose up about 6.5s later”, the report says.

The co-pilot described the helicopter as behaving in a “nodding dog cycle”, while the pilot flying said it was “not violent but uncomfortable”.

Test flights carried out by operator Bristow Helicopters in September, 2021 also successfully reproduced the behaviour across multiple airframes; pitch oscillations typically ranged between 17° nose up and 8° nose down, the company’s test pilot reported.

A review of the incident data conducted by Leonardo Helicopters determined that there was a “software design shortcoming” that had been introduced during the development of the Phase 5 software standard for the AW189.

Although the operational capability for SAR missions had been improved with the Phase 5 software release, it also created a “priority conflict” between two modes, where, in certain circumstances, “the system is trying to acquire both a groundspeed and a separate airspeed datum”, says the AAIB.

“Pitch is used to control speed and the different speed targets result in pitch oscillations,” it says.

Risk assessments carried out by the manufacturer and regulators in Europe and the UK concluded that the behaviour, although a non-compliance issue, was “not unsafe”.

Leonardo Helicopters has since incorporated a fix into its Phase 9 software release, which gained certification in July this year.

Uptake of the Phase 9 software by UK AW189 SAR operators – chiefly Bristow – will be monitored by the Civil Aviation Authority, the report adds.

In addition, the AAIB points out that the 5 July incident was not reported by the pilots at the time or caught by Bristow’s helicopter flight data-monitoring (HFDM) system; the investigation was only triggered after the crew reported the 30 July event.

“The fact that this event was not detected through the HFDM programme highlights that there can be events where the safety of the aircraft can be potentially put at risk, without other elements of the [safety management system] detecting it,” it says.

Bristow has since “reinforced the need for flightcrews to report events regardless of the perceived severity or completeness of the detail,” the AAIB adds.