Norway has terminated its contract with NH Industries (NHI) and will return the 13 NH90 helicopters so far delivered, and is also demanding a full refund of the NKr5 billion ($500 million) it has spent on their acquisition.

Oslo becomes the second country after Australia to exit the NH90 programme, after Canberra in December announced it was retiring its NH90 fleet early in favour of the Sikorsky UH-60M Black Hawk. 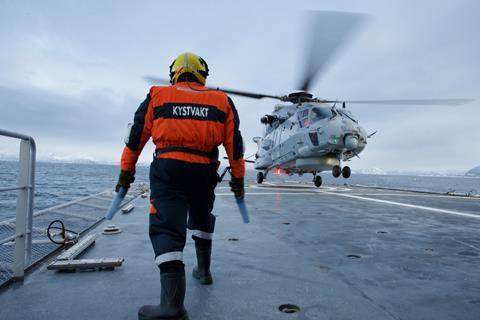 Revealing the decision on 10 June, Norwegian defence minister Bjorn Arild Gram said no amount of investment would enable the NH90 to meet the country’s requirements.

An initial delivery schedule called for all 14 maritime NH90s to be handed over by 2008, eventually slipping to 2022. However, even that amended timeline has not been met: the final helicopter will now not arrive until 2024, she says. In fact, just eight NH90s have been delivered in the final configuration.

Reliability issues continue to afflict the helicopters, Jaere says; even in their final configuration, the failure rate per flight hour is 40 times too high.

Combined with ongoing maintainability problems this frequently sees just one helicopter available, or even sometimes none.

Aircraft that were mean to fly 3,900h per year instead average 700h, says the defence ministry.

Norway’s NDMA defence materiel administration has now sent a cancellation notice to NHI and has begun preparations to return the NH90s. All the helicopters will be withdrawn from service immediately.

“We have repeatedly tried to solve the problems in collaboration with the supplier, but more than 20 years after the contract was entered into, we are still without helicopters that can do the job they were bought for, and without the supplier being able to present realistic solutions to the problems,” Jaere.

Norway will now begin the process of selecting a new maritime helicopter, with the priority given to the coastguard’s requirements.

“Maritime helicopters are something Norway must and must have, and it is therefore important that we quickly get started with the work of filling the gap created by NH90,” says Gram.

“We will look at several different alternatives to meet the operational needs, but we must be prepared for the fact that there is no easy solution.”

Oslo has long been vocal on its dissatisfaction with the NH90 and earlier this year began evaluating its options for the platform. That process concluded that even with substantial extra investments it would not be possible to improve the NH90’s performance to an acceptable level.

Poor availability rates had also led Norway to analyse the potential of leasing in helicopters for the coastguard mission, with the in-service fleet dedicated to the ASW role.

NHI – a three-way consortium comprising Airbus Helicopters, Leonardo Helicopters and GKN/Fokker – had begun a number of initiatives in an attempt to address the problems, including the recruitment of local maintenance providers such as Kongsberg.

The manufacturer says it considers the contract termination to be “legally groundless” and “refutes the allegations being made against the NH90, as well as against the company.”

It adds: “NH Industries was not offered the possibility to discuss the latest proposal made to improve the availability of the NH90 in Norway and to address the specific Norwegian requirements.”

In addition, Norway’s 14th NH90 is now ”ready for acceptance”, it says.