Norway has warned the partner companies in the NH Industries (NHI) consortium that they essentially risk being barred from future tenders if they fail to meet the country’s demands for a NKr5 billion ($500 million) refund related to its underperforming NH90 helicopters.

Oslo last week said it had terminated its contract with NHI – which comprises Airbus Helicopters, Leonardo Helicopters and GKN/Fokker – and intended to return the 13 NH90s already delivered after an analysis concluded there was no way of rescuing the programme, a position immediately dismissed by the manufacturer as “legally groundless”. 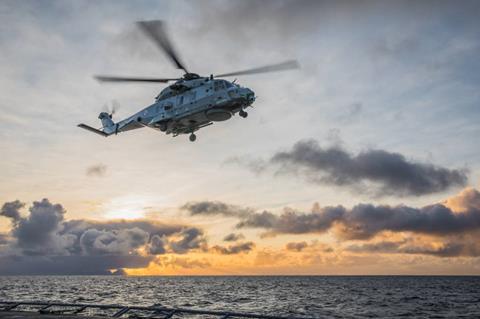 But Norway is sticking to its guns: the Norwegian defence materiel administration (NDMA) says it is “confident in the legal basis” of its decision and “will invite NHI to discuss the practicalities related to termination”.

“Considering the severity of the delays, the pertinent question in our view is how a purchaser would not have a legal right to terminate,” it says.

Under the original contract schedule, all 14 maritime NH90s were due to be handed over by 2008, a date subsequently revised to 2022. Although the final example is now ready for acceptance, the NDMA points out that work to upgrade six NH90s to the final operating configuration will not be completed until 2024, according to recent forecasts.

Announcing the contract cancellation, Norway said it was seeking a refund from NHI, including “the approximately NKr5 billion it has paid under the contract, in addition to interest and other expenses”.

Should the situation not be resolved to Norway’s satisfaction, the NHI partners run the risk of being excluded from future tenders, notably that for the replacement of the NH90s and a looming requirement for special forces helicopters.

Asked if it would work with the NHI consortium members in future, the NDMA says it “depends on our suppliers” to meet the needs of the nation’s armed forces, but adds: “That being said, a decision to include or exclude [those] companies in future acquisitions would be made on a case-by-case basis based on a number of factors, not least including the resolution of this matter.”

In its response to the decision, NHI said it had not been “offered the possibility to discuss the latest proposal made to improve the availability of the NH90 in Norway, and to address the specific Norwegian requirements”.

However, the NDMA disagrees, noting its “long-standing dialogue” with NHI since the start of the programme, during which it has “made them fully aware of our concerns right up until the termination”.

“Through this dialogue they have had every opportunity to present solutions to the various shortcomings, but they have unfortunately not been able to do so in a way that gives us the necessary confidence that the outstanding problems and delays would be resolved.”

The NDMA notes the analysis presented to the defence ministry concluded that there was “no level of investment that with a high degree of confidence would improve the availability and performance of the NH90 sufficiently to meet the requirements of the contract.” 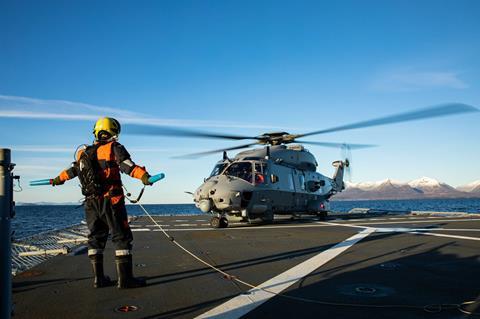 Norway may look to lease in helicopters for coastguard mission

No details of the analysis have so far emerged, but one insider describes the evidence presented to support the decision as “categorical”.

As the NH90s have now been withdrawn from service, Norway will now have to contend with a capability cap, particularly in regard to anti-submarine warfare (ASW), until replacements can be acquired.

However, the NDMA says that “delays and limitations” with the NH90s meant that it was already dealing with “a number of capability gaps, including ASW”.

“We therefore consider the termination as part of our effort towards addressing this and other related issues.”

Indeed, one of Norway’s principal complaints about the platform was around the unresolved obsolescence of “several critical mission systems”, including those related to ASW.

“All we can say at this point is that this issue was never resolved in a way that we found acceptable within the terms of the contract and in terms of achieving any meaningful level of capability,” says the NDMA.

A process to acquire a replacement for the NH90 is now being started. While it could take a minimum of five years before new helicopters arrive, the NDMA says it will see if the process can be expedited.

Norway intended to use the NH90s for two distinct mission sets: ASW and coastguard support, including search and rescue and border patrol tasks.

It had previously begun evaluating whether it was feasible to lease in helicopters from the private sector to fulfil the coastguard mission, freeing up NH90s for ASW operations.

That strategy is still be on the table, however: “What has been indicated by the Ministry of Defence is that the upcoming review of alternatives should consider whether there are ways of filling the needs of the coastguard in the near term, for instance through leasing, while a more complex ASW capability is being considered and implemented,” says the NDMA. 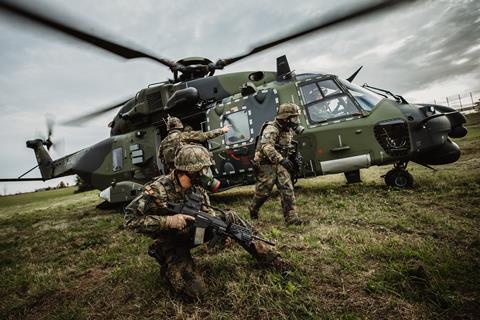 Separately, NHI has signed a support contract with NATO’s NAHEMA agency designed to increase the availability rate of the NH90 helicopters operated by France and Germany.

Under the flight hour-based agreement, the two countries will delegate large parts of the maintenance and logistics activities related to the helicopters to NHI. It has also been designed to allow other nations to join at any point.

“NH Industries is fully committed to ensuring customer satisfaction, and the contents of this agreement have been carefully crafted in order to provide the French and German armed forces with the right set of services for improving NH90 operability, affordability and serviceability,” says Nathalie Tarnaud Laude, president of NH Industries.

The agreement is for an initial five-year period, with two optional extensions of five years each. It applies to up to 100 NH90s in France and 131 NH90s in Germany, and covers both the naval NFH and troop transport TTH variants.