Airbus Helicopters has unveiled a radical change in the configuration of its new high-speed compound rotorcraft, which is being developed as part of the European CleanSky 2 initiative.

Although the manufacturer released some details of its proposal – internally dubbed "Racer" – at last year's ILA Berlin air show, the images it showed were deliberately unrepresentative of its planned design, it admits.

Tomasz Krysinski, Airbus Helicopters head of research and technology, says the configuration revealed today was "already frozen [at ILA]", having successfully passed a series of windtunnel tests in Germany and the UK in early 2016. 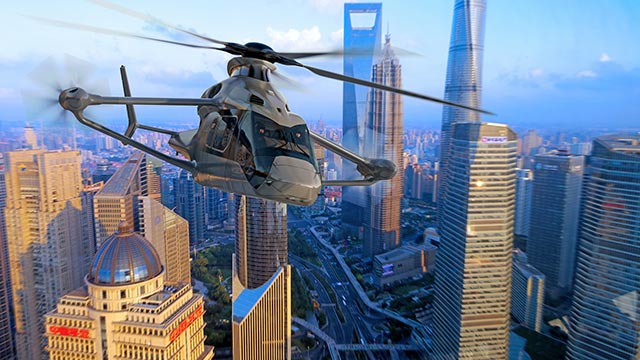 "We did simulations and the testing in the windtunnel confirmed [the benefits] so we immediately switched to modify the design," says Krysinski.

He says that the box-wing design with pusher propellers – which received a US patent last year following a 2013 application – offers performance and safety improvements.

More lift is generated by the box-wing than the wing-stubs Airbus Helicopters used on its X3 demonstrator programme, vital when the speed of the main rotor is reduced in forward flight.

In addition, the up-and-over configuration allows the wing surface to be doubled without a related increase in the area exposed to the rotor downwash, preserving low-speed hover performance.

The box-wing is also positioned on the aft fuselage, moving the rear-facing propellers further back and providing passengers with safe and unobstructed access to the cabin.

And, says Krysinski, the box-wing and pusher prop combination reduces power demand by 10% in forward flight because of the way the air flow is channelled, improving fuel consumption and increasing range.

Main landing gears retract into the lower wing, rather than the fuselage, improving stability on the ground by providing a wider footprint, as well as enhancing the operation of the gear itself.

In addition, power from the Racer's twin Safran Helicopter Engines RTM322 turboshafts is routed through a gearbox and bearingless, flexible driveshafts down the upper part of the box-wing to the propellers.

The added rigidity of the box-wing helps this design, says Krysinski, by reducing deflection, which enables simplification of the driveshaft.

"We tested the principle [of the flexible shaft] on the X3 but the design is now optimised in terms of manufacturing processes and materials and the mass is strongly reduced," he adds.

Initially the shaft will be metallic, but a second iteration – to arrive one year after first flight – will use composite instead, he adds.

The lower wing on the initial demonstrator will also feature active control surfaces, but it will assess their suitability for later versions.

Additionally, Krysinski is confident that the Racer will be able to fly at about 180-190kt (333-351km/h) with one engine idled, at what he calls "eco-speed". The fuel consumption in this configuration is much lower than in an equivalent conventional helicopter flying at 140kt.

Airbus Helicopters is working with engine supplier Safran Helicopter Engines to develop a means of rapidly restarting the idled powerplant, he adds.

The wide tail, with distinctive vertical stabilisers, is similar to that on the X3 and Krysinski says the design was chosen following windtunnel testing. "Interaction with the air flow coming from the main rotor, cowling and box-wing is minimised, and surfaces and mass are reduced", he says.

Final assembly of the rotorcraft is due to begin in 2019, with its maiden sortie scheduled for 2020. The initial design is for a helicopter that is bigger than the X3, which sat in the 5t helicopter class.