RUAG Aviation is showcasing its Swiss precision in the military upgrades market, with an example of its work available for inspection in the static display.

So successful was the company’s major modernisation of the Swiss air force’s Airbus Helicopters A332 Super Puma rotorcraft – one of which is making a return visit after its Le Bourget debut in 2013 – that the service has asked it to perform a similar project on its younger AS532 Cougars.

Maintenance, repair and overhaul specialist RUAG returned the last upgraded Super Puma to service almost a year ago, and “the customer is very happy – the aircraft has been reliable from day one,” says Heinz Scholl, its senior vice-president, military aviation.

Now under way, the Cougar project is intended “to unify the two fleets as much as possible”, he says. A contract to prepare a prototype aircraft was signed last December, and “we are now full speed ahead to get the same cockpit architecture”.

First flight of the updated Cougar is scheduled during 2016, with the helicopter to receive digital displays an enhanced package of self-protection systems, including additional chaff and flare dispensers. But, says Scholl, the major undertaking will a full replacement of its wiring. “That’s several hundred kilograms of cable, and 50,000 point-to-point connections,” he notes. 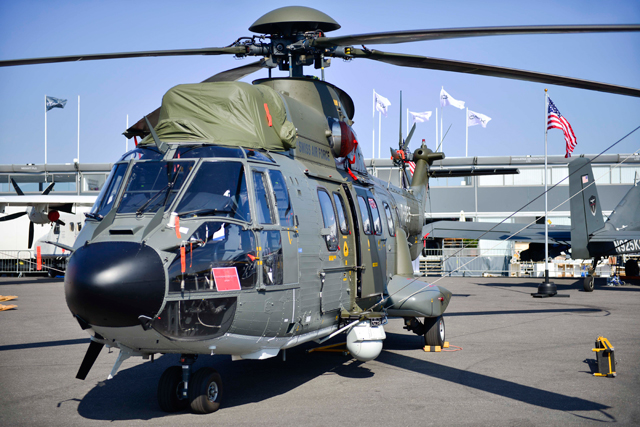 The upgraded Super Puma is back again this year

Subsequent aircraft will receive the enhancements as part of scheduled major overhauls. Flightglobal’s Ascend Fleets database shows 11 of the type as being in Swiss service.

Scholl says the strong relationship between RUAG and the Swiss air force was key to the success of the Super Puma modernisation, and the progress so far with its follow-on activity, which is also benefitting from shorter decision cycles.

“Very close cooperation with the customer – that’s the way we work,” he says, adding: “we have followed this fleet ever since its in-service date, as an MRO provider.”

RUAG is not trying to sell the exact Swiss Super Puma/Cougar modernisation package to other operators; rather use it as an example of its ability to bring together such a detailed package of updates.

“Not being an OEM, our focus is really to do a tailored upgrade,” says Scholl. “It’s not our focus to do exactly the same thing.”

The company also is currently updating the cockpits of 15 Pilatus PC-6 utility aircraft for the Swiss air force. The project includes supplemental type certification of an autopilot installation, to support all-weather operations.