Initially pitched at the civil transport market, a military version of the 12-seater will follow about two years after first flight, designed to perform search and rescue, troop transport or casualty evacuation missions.

TAI believes it can secure orders for about 300 domestic orders over the next 15 years, with exports accounting for another 500 airframes over a 20-25-year period.

Metin Sancar, executive vice-president helicopter group at TAI, sees successful execution of the programme as ushering in a potential family of Turkish-designed and built helicopters, spanning the size range from 3.5t all the way up to 10-12t. 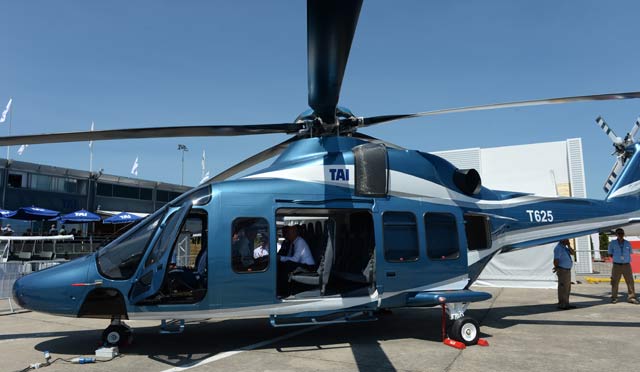 Although it has yet to attract a launch customer for the T625, Sancar says the Turkish government has expressed interest in placing a multi-unit order.

"We are talking with our government but they are waiting for first flight. As a police helicopter it will have a good market in Turkey," he says.

Powered by twin CTS800 engines from the Rolls-Royce/Honeywell joint venture LHTEC, the T625 can accommodate 12 passengers and will have a maximum take-off weight of about 6t.

The powerplants are the only part of the helicopter not produced in Turkey, but Tusas Engine Industries is developing an indigenous turboshaft which will feature at a later date.

Aselsan provides the all-glass cockpit, which features large touchscreen displays. "You won't find these displays in any other helicopter in the world," says Sancar.

The T625 builds on the successful development of TAI's T129 Atak helicopter, of which 22 examples, from an initial order for 59 units, have been delivered to the Turkish army.

Sancar says the Atak has displayed such a high level of maturity that Ankara has already begun negotiations to acquire a second batch of at least 25 helicopters.

In addition, TAI is confident of securing its first export order for the type this year, with Pakistan due to sign for an undisclosed quantity.