The rotorcraft arrived at Kandahar airfield aboard a US Air Force Boeing C-17 strategic transport, following a flight from Huntsville, Alabama.

"More than 150 Black Hawks, divested from US Army stock, will be shipped to Afghanistan over the next five years," says Giovanni Estrada, country programme manager at the US Army Security Assistance Command.

Under current plans, this total would include 61 aircraft to be used in a basic utility configuration, plus at least 58 armed examples.

The transfers – being conducted under a project dubbed the “Black Hawk exchange and sale transaction” – will enable Kabul to replace its ageing fleet of Mil Mi-17 transports. 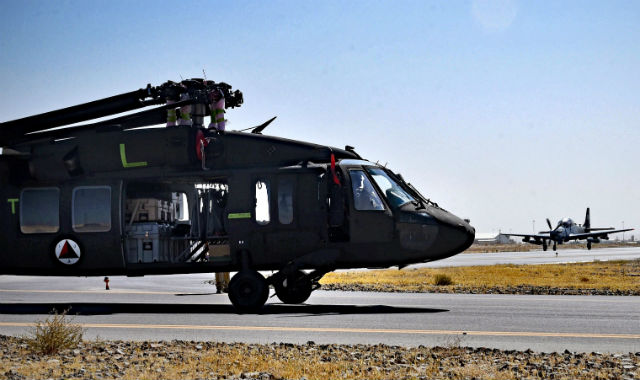 "The high utilisation and accelerated attrition rate of the Mi-17 fleet has made the transition to Black Hawks essential to the Afghan forces' ability to maintain a high operations tempo as they battle against insurgent forces," says Brig Gen Thomas Todd, programme executive officer for aviation.

Operations with the US-built type are eventually planned to be conducted from four Afghan air force bases.

"Delivery of more than 50 Black Hawks have been funded by Congress this year," the US Army says, adding: "Delivery of the remaining helicopters will rely on Congress approving funds every year to keep the programme on track."

Prior to the first training course commencing at Kandahar, the US Army has already delivered pilot instruction at Fort Rucker in Alabama.

“The Afghan air force will begin by transitioning Mi-17 pilots and maintainers, as we expect they will adapt faster to the Black Hawk," says Brig Gen Phillip Stewart, commander of the Kandahar-based 438th Air Expeditionary Wing.

Flight Fleets Analyzer records the Afghan air force as operating 40 Mi-8/17s, ranging between four and 35 years in age. The Afghan Special Mission Wing has 56 of the type in its inventory.

The service has also introduced MD Helicopters' armed MD530F to its inventory, in addition to fixed-wing strike assets including Embraer/Sierra Nevada A-29 Super Tucanos and Cessna AC-208s.