The Korean Airlines Aerospace Division (KAL-ASD) has conducted the maiden flight of the 500MD, an unmanned helicopter based on the MD Helicopters MD500, and laid out ambitions to create unmanned variants of other legacy types.

The first flight of the 500MD, which bears the registration KUS-VH, took place at the Korea Aerospace Research Institute’s aviation centre in Goeheung, South Korea. It lasted for 30min, and saw the helicopter take-off and hover around 30ft above the ground.

Prior to the flight KAL-ASD conducted ground tests, a remote engine start, and tethered hovers.

The test, says KAL-ASD, showed “the capabilities and functionality of the unmanned flight control system.” 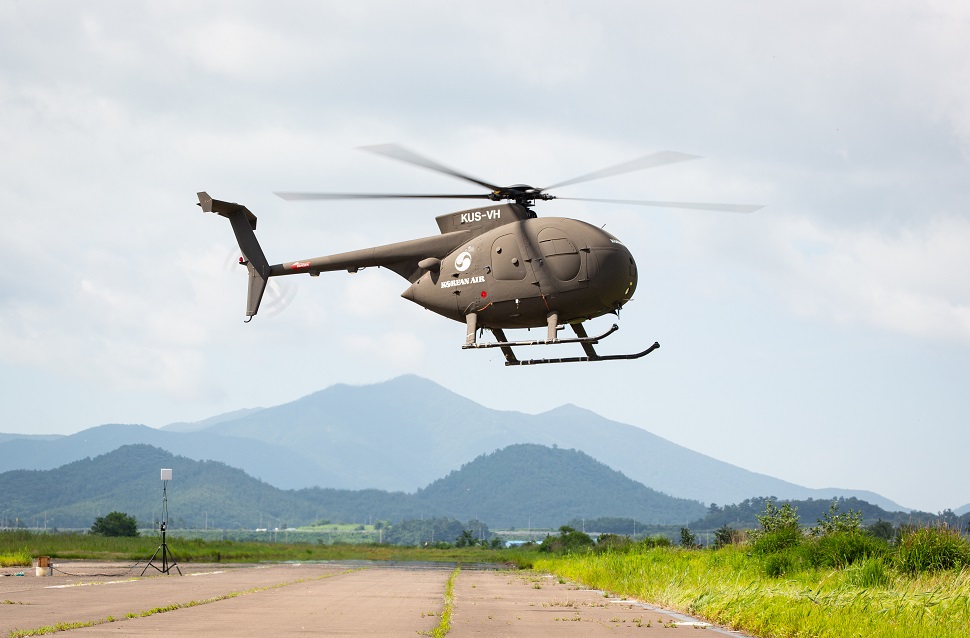 The company has been working on the project since 2014. It displayed a full-sized mockup of KUS-VH at the Seoul International Aerospace & Defense Exhibition (ADEX) in 2015.

“After further development and once the mission equipment has been installed, it is expected to be utilised in various fields such as surveillance and reconnaissance during the daytime and nighttime.”

Boeing provided extensive expertise for the programme, drawing on its work with the unmanned H-6U Little Bird programme.

KAL-ASD plans to gradually expand the aircraft’s range and altitude until 2021 to “accommodate potential customer requirements” and integrate various sensors and equipment.

Although the company statement made no mention of weapons, at the 2015 ADEX show it appeared with two Lockheed Martin AGM-114 Hellfire air-to-surface missiles and a pod of 2.75in-diameter rockets.

The South Korean government is not understood to have a formal requirement for such a platform, but KAL-ASD has reasoned that 500MD conversions would be an efficient way to recycle retired MD500s.

Cirium’s Fleets Analyzer shows that the South Korean army has 251 MD500s with an average age of 37.4 years.

The KAL-ASD statement adds that having demonstrated the ability to convert the MD500 into an unmanned platform, the company hopes to do the same with the Bell UH-1H and Sikorsky UH-60, in addition the Northrop F-5 fighter.