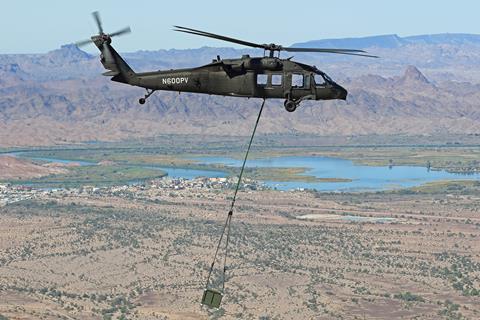 A DARPA test project, using software developed by Sikorsky, successfully modified a standard UH-60 Black Hawk to fly autonomously, without a pilot onboard or on the ground

The goal of the effort, Young says, is to give commanders more flexibility in the face of constraints like mandatory crew rest, casualties or battlefield hazards. “We can go to one pilot, where you may not have enough pilots for some missions, or we can go down to no pilot.”

DARPA says the October ALIAS test included three flight missions: a battlefield resupply of blood, a casualty evacuation and a “sling load” (with cargo suspended below the aircraft for transport).

In a combat environment, casualty evacuations and troop resupply missions are often some of the riskiest flight missions, called for when friendly ground forces are under fire and may not have access to safe landing zones.

“It’s really all done because of safety,” Igor Cherepinsky, director of Sikorsky Innovations, says of the autonomous flight initiative. “Our mission is to make the safest possible flying machines.”

Sikorsky, which builds the UH-60 Black Hawk used in the experiment, also developed the flight control software to enable pilotless operations, which the company calls Matrix.

Matrix was first flown without pilots aboard in a February 2022 ALIAS test event. During two flights, a Matrix-powered UH-60 performed simple aerial manoeuvres and navigated in a simulated New York skyline.

The more-recent missions represent a greater level of difficulty, including a 72nm (134km) round-trip flight and the transport of a 1180kg (2,600lb) sling load.

Cherepinsky describes Matrix as “a true autonomous system”, with no “man in the loop” piloting, either remotely or otherwise.

“It really is designed to be operated by non-aviators”, he says of the Matrix interface. The entire system can be controlled from a standard US Army tablet, on which an operator can initiate flight missions or designate landing zones.

From there, Matrix takes over. It can identify obstacles and land difficult environmental conditions – dust, snow and darkness.

“The aircraft detects its own landing zones and handles its own contingencies,” says Cherepinsky.

The long-time Sikorsky engineer envisions autonomous flight as augmenting, rather than replacing, human pilots. He predicts the capability will be ideal for simple or repetitive missions that burn through pilot hours, and high-risk flights that may not be approved when a human crew is in jeopardy.

However, operations that may require some level of “human creativity” will still use onboard crew, says Cherepinsky.

Notably, ALIAS uses a standard UH-60 model, of which the Army has more than 2,220, according to Cirium data. ALIAS-configuration Black Hawks can still be flown by a human pilot, using the existing on board controls.

“The aircraft is outfitted with a fly-by-wire system, says Young. “The ALIAS system interacts with the aircraft through the flight computer and the electromagnetic actuators. If a pilot is operating the system, then the cyclic and collective are essentially joystick inputs to the aircraft.”

Cherepinsky says conversions enabling pilotless flight can be completed in as little as a few weeks for aircraft in good working order. He describes conversion costs as a “fairly small” portion of total aircraft expenses, saying, “the economics… work out”.

Cherepinsky says Matrix has logged just over 10h of flight time without a pilot onboard. The system has logged substantially more hours with the presence of a safety pilot backing it up.

The company is already in talks with the US Navy about implementing the autonomous capability on Sikorsky’s CH-53K heavy lift rotorcraft, which is on order for the US Marine Corps (USMC).

Young says following the success of the latest UH-60 ALIAS tests, DARPA will likely wind down the experimental programme and hand it off to one of the active service components for further development into an operational capability.

He adds the agency is “very confident” the technology will be adopted, noting the US Army, US Air Force and USMC have all expressed interest. “The overwhelming response from the services is that this has opened their eyes to what is possible.”

DARPA is also seeking to make the technology available to interested partners in the commercial aerospace industry. Sikorsky says it has tested Matrix on other airframes, in addition to the Black Hawk, and will pursue FAA certification for the software.

Story updated 3 November to include additional comments from DARPA on the ALIAS flight control system.