Defence minister Richard Marles – who also serves as the country’s deputy prime minister – has issued a statement slamming the management of major acquisitions under the previous government of Scott Morrison, stating that programmes with budgets in excess of A$69 billion ($62.7 billion) face major schedule delays and budget variations. 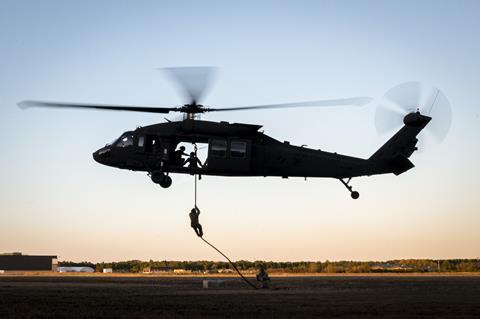 A US Army UH-60M in October 2020. Interoperability with US forces is seen as a key driver for a possible Australian UH-60M deal

He adds that of these programmes, at least 28 are a “combined 97 years behind schedule”, with 18 running over budget, with budget variations running to A$6.5 billion.

“The Morrison government’s investment in defence saw key projects blow out in both cost and time,” says Marles.

“It’s not as though we can go onto the battlefield and overwhelm our adversary by waving a copy of the budget papers in their face. Given the current strategic circumstances we face, we need to be better focused on the quality of spending within defence to ensure we are providing our Australian Defence Force personnel with the best capability.”

The bulk of Marles’s remarks focus on shipbuilding challenges, but he does list Australia’s A$1.4 billion acquisition of 10 Leonardo C-27J tactical transports, observing that they “were delivered four and half years behind schedule and are unable to fly into battlefields”.

In July 2021, Canberra redefined the mission of the Royal Australian Air Force’s C-27Js – previously hailed as “battlefield airlifters” – to focus on humanitarian and disaster relief missions.

While Marles’s formal statement does not reference the decision to partially replace 47 NH Industries MRH90 Taipans (the local designation for the NH90) with the 40 UH-60Ms, he discussed the UH-60M plan during an interview on ABC radio.

“We’ve not hidden the fact that we are concerned about the Taipans,” says Marles.

“It is one of the 28 projects that we’ve described here. And we are looking at other options, which includes the Black Hawks that would potentially be provided out of the United States. But that review is still underway, and will resolve soon. I don’t want to pre-empt that decision. But we’re obviously looking at ways in which we can get the multi-role helicopter function done in a way which is effective and provides value for money.”

In December 2021, the Morrison administration announced that it would drop its 47 MRH90s far before their planned retirement in 2037, citing the “unreliability” and cost of the platform. From its service entry in 2014, the 11t-class helicopter has suffered a troubled history, prompting the decision to replace them with Black Hawks.

In August, the US government cleared a possible Foreign Military Sales deal to provide Australia with 40 UH-60Ms for up to $1.95 billion.