Leonardo Helicopters has halted development of a full ice protection system (FIPS) for the medium-twin AW169 after it became apparent that the modification would not meet the specifications agreed with its customer, Swiss rescue operator Rega.

As a result, the pair have agreed to terminate an order for three “all weather” AW169s; deliveries were due to begin next year. 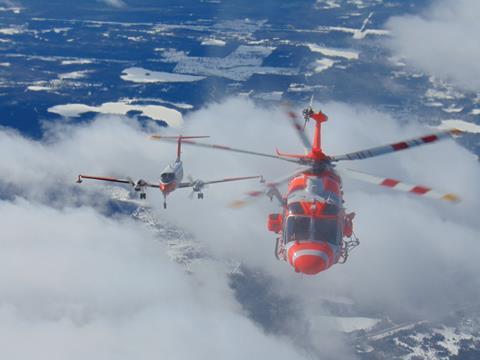 Tests of the anti-icing system were conducted in North America

Rega says it has been informed by Leonardo Helicopters that although the anti-icing system “fundamentally works”, once installed, the rotorcraft “no longer meets the agreed high-performance requirements” stipulated by the operator.

All deposits for the AW169s will now be refunded in full, it adds.

Rega’s contract with Leonardo Helicopters, signed in 2015 as part of its “Project Icebird” refleeting, foresaw deliveries from 2020. At the time, the manufacturer said the AW169 would be the ”lightest helicopter ever built with such a feature.”

Anti-icing systems are typically fitted to larger helicopters, but these are too heavy for the vast majority of hospital helipads, Rega says.

“From the outset, Rega and Leonardo were aware that this was a pioneering project, with no guarantee of it being implemented. For this reason, recognition and gratitude are due to Leonardo for taking this development risk,” the operator says.

“Rega therefore intends to follow the technological developments very closely and is convinced that one day it will be possible to equip medium-weight helicopters that are suitable for use by Rega with an anti-icing system.”