When the US Marine Corps received the last of its Bell UH-1Y Venom helicopters in April 2018 – some 61 years and six months after the prototype XH-40 first lifted off the ground – it was the beginning of the end for the pioneering rotorcraft.

Known to the public by its nickname "Huey", a pronunciation of its original HU-1 military designation, the helicopter changed aviation history and the nature of modern warfare. The twin-blade rotorcraft was the first production helicopter to use a turboshaft engine, and its cabin capacity enabled the development of modern air assault tactics.

Today, some 1,085 UH-1D Iroquois are still in service, despite an average age of 46 years, according to Flight Fleets Analyzer – a testament to the helicopter’s simple semi-rigid rotor system and rugged airframe. 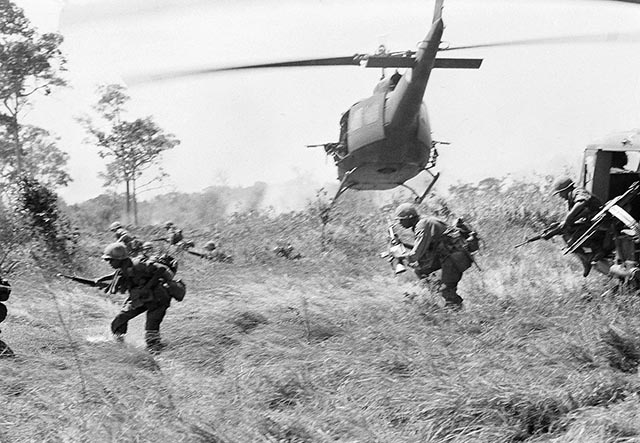 The initial development of the Huey came out of a desire from the US Army for a medevac and utility helicopter that could hold two stretchers inside the cabin and a medical attendant – a direct result of the growing use of helicopters such as the Sikorsky H-19 Chickasaw and Bell 47 during the Korean War for medical evacuation.

"When the [Korean] War starts, basically the Army has around 60 helicopters," says Bob Mitchell, US Army Aviation Museum curator. "By the time the war ends, we have over 600 helicopters."

However, those early "whirly birds" lacked power and cabin capacity. And, says Roger Connor, a curator at the Smithsonian National Air and Space Museum, the US Army was beginning to envision a bigger role for these new machines, especially as it saw British and French forces using helicopters as troop transports and gunships during the Malayan Emergency and Algerian War of Independence.

Combined with fears of imagined nuclear wars, which could destroy whole networks of infrastructure in moments, Lt Gen James M. Gavin laid out the US Army's ideas for an air mobile force in a 1954 piece published by Harper's Weekly titled: "Cavalry, and I don't mean horses".

In 1955, Bell Aircraft won the US Army's first production turbine-powered utility helicopter contract, and not long after, on 22 October 1956, the prototype XH-40 took to the air for the first time. Despite showing promise, the early versions of the Huey did not surpass the power and payload capacity of piston-powered rivals such as the Sikorsky H-19, says Connor.

"Early versions of the Huey, the engines tended to be quite finicky and they would lag quite a bit," he says. "The helicopter tended to be difficult to fly. You could get yourself in trouble with it pretty quickly."

The XH-40 had two advantages, however: a semi-rigid rotor system and a turbine engine. The semi-rigid rotor system already in use on the Korean War-era Bell 47 – which gained familiarity as the medevac helicopter in the 1970s TV show M*A*S*H – was already proven to be easy to operate, rugged and simple to maintain. And the small size of the helicopter's Lycoming XT53 gas turbine allowed Bell to position the powerplant above the Huey's cabin, making it easier to balance the aircraft's centre of gravity, while expanding the size and payload capacity of the cabin.

"The turbine now frees up that centre cabin for instant loading, which turns out to be really useful for all kinds of things the Huey is put to later on," says Connor.

The size and weight of piston engines on the other hand greatly limited the cabin capacity of early helicopters. For example, Sikorsky had to counterbalance cabin payloads by putting a large piston engine in the nose of its S-55 helicopter. 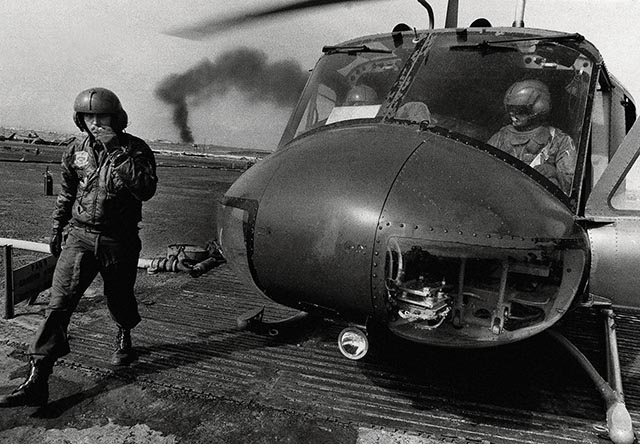 In May 1959, Flight described the turbine engine's advantage in configuring the Huey “A” model: "A low silhouette places the cabin floor at knee height, permitting ease of loading of cargo or passengers. Wide sliding doors give quick access to the passenger/cargo area and separate doors open to the crew positions."

A low-slung, wide helicopter cabin would prove to be revolutionary for military commanders. "That [Huey] tadpole shape, as they called it, with wide doors on the side, that means they can come into the landing zone, troops can get out, and you can mass troops on the objective faster," says Scott Clifton, Bell's director of global military business development. "We basically hit on the perfect shape for helicopters."

In fact, the ability to hop over the enemy and precisely deliver dozens of troops into a small landing zone upended military tactics, which previously relied on ground vehicles.

"It changed the way the Army fought," says Mitchell. “Instead of loading trucks up with troops and driving off to the dropping-off point and then going into action, you could surprise the enemy by basically landing inside their perimeter with troops fresh to the fight."

Early Hueys – A, B and C versions of the UH-1 – lacked troop capacity, however, and so were primarily used for air ambulance and fire support work, says Connor. But by 1963, shortly before the USA escalated its involvement in Vietnam, the UH-1D had been delivered to the US Army with an extended fuselage that carried an advertised 13 troops, and a Lycoming T53-L-9 1,100shp (820kW) gas-turbine.

The Army’s reliance on the D model, and later the more powerful H variant, did much to conflate Vietnam with helicopters in the minds of Americans who watched the war on TV and film. Famously, Huey imagery included a scene from the cinema classic Apocalypse Now, where 1st Cavalry troops fly in to assault a Viet Cong-controlled village – to the tune of Wagner's "Ride of the Valkyries".

Indeed, the US Army during Vietnam deployed thousands of Hueys for air assault, cargo transport, medical evacuation, search and rescue, electronic warfare, and ground attack missions. But versatility and necessity combined to test the aircraft's limits; pilots in Vietnam often had to fly overburdened with gear and troops on missions in hot, humid and high-altitude environments, conditions that degraded performance.

"The book said you could put 13 troops in there. I never saw 13 Americans in a Huey," says Harry Kernahan, who flew the UH-1D "Slick", a utility version without weapons pods, in the central highlands of South Vietnam from 1969 to 1970. "It just wouldn’t get off the ground."

"I would imagine we often flew those things over max gross weight," he adds.

Out of necessity, pilots became experts at using unorthodox methods to coax overweight Hueys off the ground, including an odd-to-see technique where a pilot would bounce the helicopter down the runway on its skids until it got enough speed to gain translational lift and climb aloft. "People came up with solutions to a lot of different problems that weren't in the book," Kernahan says.<

If the helicopter's performance was overmatched in some areas, it surprised in reliability and precision flight in others. "With the help of the crew we would bring those aircraft into very, very small [jungle clearings]. In some cases, close enough where the rotor blades would clip a branch or two," says Kernahan. "Not a big deal. A big deal was keeping the tail rotor away from everything."

Pilots often worked long shifts, and refuelled aircraft while still hot and running, he adds: "I flew 14h one day and we never shut down. We ate in the cockpit, a can of C-rations in the cockpit as we were going between places."

Ultimately, Bell would produce and license dozens of variants of the UH-1, including the four-bladed, twin-turbine-powered Bell UH-1Y Venom. According to the company, 10,416 UH-1s were manufactured at its plant in Fort Worth, Texas. The aircraft would also form the basis for the Bell AH-1 Cobra, the US Army’s first pure attack helicopter, as well as several civilian variants.

The Huey’s influence on modern warfare was ultimately profound. “The types of operations that we performed with the Huey and pioneered with the Huey are the basic way we still move are troops around today,” says Connor.

“The idea of air mobility, of not being tethered to fixed defensive positions and infrastructure, being able to hop over enemy forces, that’s been the enduring idea behind our operations ever since.”