All three of the new fixed-wing training aircraft types in service with the UK Royal Air Force (RAF) will be presented on the static display at this year’s Royal International Air Tattoo (RIAT) by their military operators following the recent completion of deliveries via Affinity Flying Training Services.

“All 38 of our aircraft are now in the UK and available for use, and we are fully established on the three [operating] sites,” says Martin Fausset, chief executive of Elbit Systems UK, which, along with joint venture partner KBR makes up Affinity. 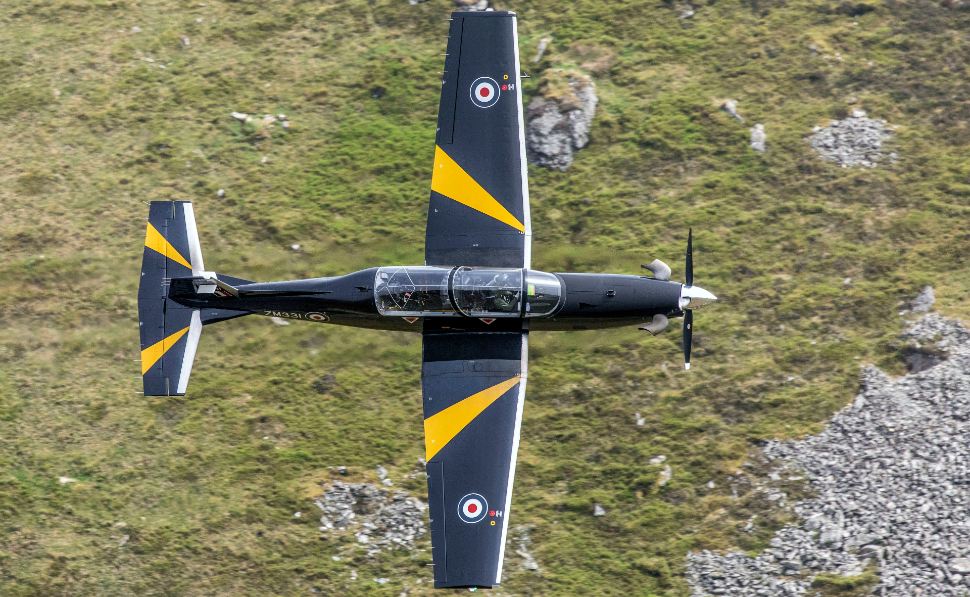 “All three aircraft types are through the UK approval process and now available for flight instructors to use to train pilots – that’s a very good milestone,” Fausset says. Affinity in February 2016 received a fixed-price contract to provide the assets in support of the tri-­service UK Military Flying Training System (MFTS) programme.

Operations are conducted from the RAF’s Barkston Heath and Cranwell bases in Lincolnshire with the G120TP Prefect, its Valley site on Anglesey for the T-6C Texan T1, and Cranwell with the Phenom. Introduction of the types has been overseen by the Ministry of Defence (MoD) and its training system partner, Ascent Flight Training.

Some 10,000 flight hours have already been logged using the trio of new types, and Affinity says that with operations now gathering pace, this is due to be doubled before the end of the 2019-2020 financial year.

The Affinity-supplied fleet is still in its ramp-up phase, as the RAF transitions from using legacy assets the G115 Tutor, Short Tucano T1 and leased Beechcraft King Air 200s.

Fausset says the G120TP fleet is “pretty busy at the two sites”, with the type now supporting its first few courses of students. With agile handling performance and equipped with glass cockpit avionics, Fausset says the type’s advanced systems “are exactly what you need for the latest generation of aircraft that the pilots are going to go on to fly”.

The T-6Cs are the most recent arrivals, with the final example having been flown to RAF Valley last December. Instructors are currently using the turboprops for aircraft familiarisation and to support the completion of syllabus preparations, ahead of a first training course commencing later this year.

“The Texan is a great aircraft used by many air forces around the world, with an advanced cockpit which enables the opportunity to use it for much more sophisticated training than its predecessor, the Tucano, was able to support,” Fausset says. “We think that in time there is likely to be a downloading [of training tasks] off more sophisticated aircraft onto the Texan.”

While use of the Phenom fleet is in its early stages, the twinjet will become increasingly important to the UK. “With the arrival in the RAF of more multi-engined aircraft, with the [Boeing] P-8s and Wedgetail, there is more pilot training need,” Fausset notes. 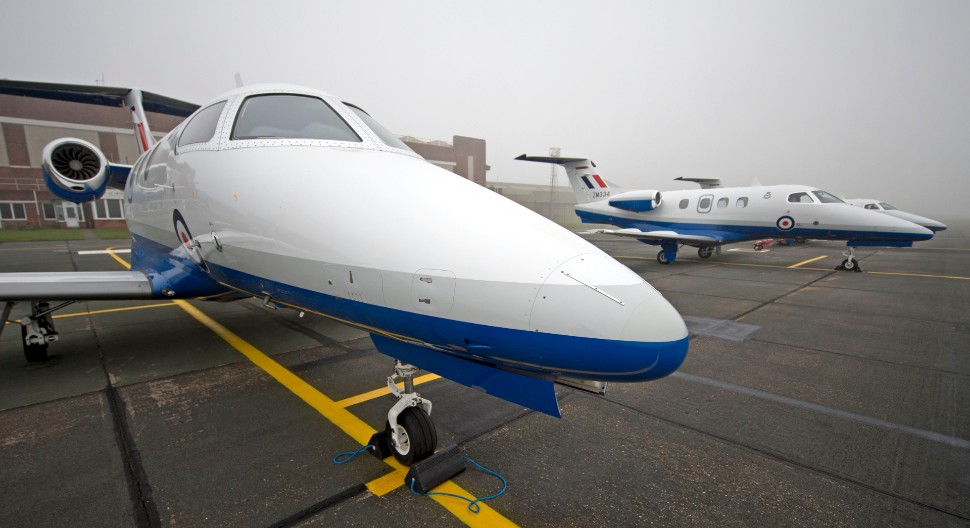 Two of the new Phenoms were put out of action in June 2018, following an in-flight incident during which the MoD says their wing-tips “came into contact with each other”. One of these was swiftly returned to use following repairs, while the other has required more comprehensive work, having also suffered “some fuselage damage”. Fausset says this activity is now almost complete, and that the aircraft is due to be returned to use within “a matter of weeks”.

Meanwhile, studies are under way to assess whether additional airframes will be required to meet increased demand as a result of the RAF retaining more Eurofighter Typhoons in frontline use than previously expected, and its pending introduction of the Boeing 737-based P-8A Poseidon MPA1 maritime patrol aircraft and E-7A airborne early warning and control system platform.

“Under the [2015] SDSR [Strategic Defence and Security Review] changes and subsequent discussion, it is likely that a business case will be considered for having more Phenoms and more Texans,” Fausset says. “We would be happy to support that, if that conclusion is reached as a result of the analysis.” Affinity has supplied information to aid the process, he confirms.

“Unsurprisingly, the size of the task when it comes to training pilots over time changes,” he notes. “If you need more pilots trained then obviously you have to look at the totality of the system.”

But future business opportunities aside, Fausset notes: “Our desire at the moment is to get the aircraft being used for courses at the highest possible rate.” Pointing to Affinity’s relationship with Ascent and the RAF, he says: “It’s a team effort – there’s no use having lots of aircraft available if the instructors aren’t there to fly them, or the trainees are somewhere else.”

Single examples of all three types will be in the static display at the show, including a G120TP of Cranwell-based 57 Sqn, a T-6C Texan assigned to the RAF’s 4 Flying Training Squadron unit and a Phenom from 45 Sqn.

Another of the UK’s MFTS platforms – a BAE Systems Hawk T2 from RAF Valley-based 25 Sqn – will also be at the show, as will a King Air 350 Avenger observer trainer from the Royal Navy’s 750 NAS.

In addition to replacing its fixed-wing training assets, the UK has also introduced a new generation of helicopters to prepare its military crews for future operations. 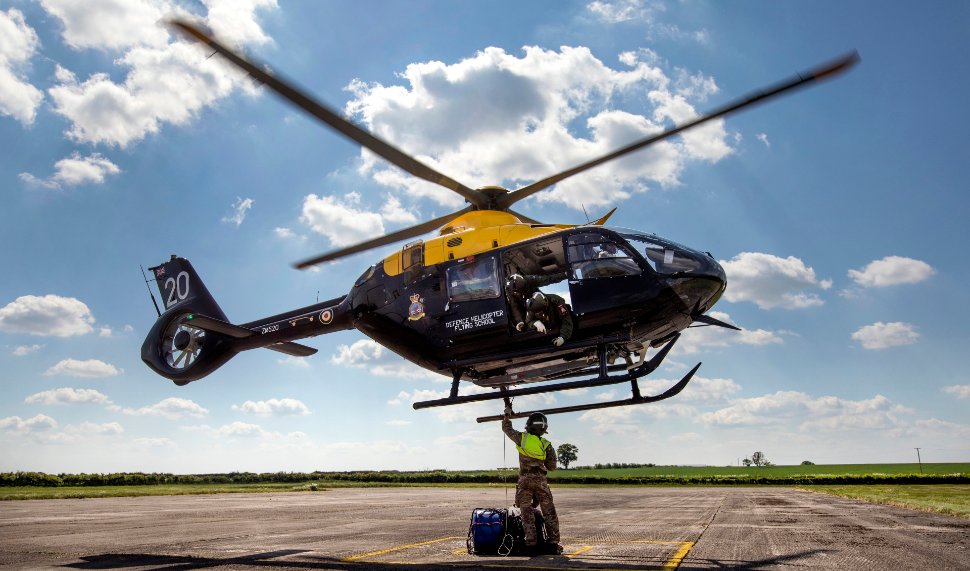 Also on static display at RIAT, the H135 Juno T1 (pictured) and H145 Jupiter T1 were supplied to Ascent via Airbus Helicopters’ UK arm. A respective 29 and three examples of the medium-twins have been provided for use at the Defence Helicopter Flying School (DHFS) at RAF Shawbury in Shropshire and to support mountain training activities from its Valley base.

Ordered in May 2016 as replacements for Airbus Helicopters AS350 Squirrels and Bell 412EP Griffins, the Juno and Jupiter fleet was declared ready for training on 1 April 2018. Full operational capability came last October, as the final rotorcraft was handed over, and just one month later DHFS marked the completion of their first 10,000 flying hours.

On 17 May, the first eight rear crew members to receive instruction on the new types graduated from the school. Elements of their training included providing voice marshalling for the aircraft’s pilots, plus navigation and flying operations in confined areas, with underslung loads and over mountainous terrain.

“With the combination of the finest ground-based synthetic training and state-of-the-art equipment, our personnel are trained using the most modern technology of any armed service, with a pattern of spiral development encouraging ongoing innovation and improvement as MFTS develops,” says Air Vice Marshal Warren James, air officer commanding the RAF’s 22 Group training organisation.

“We will shortly be operating at maximum capacity, ensuring that our personnel receive world-leading training before moving on to frontline units,” adds Group Captain Chris Mullen, Shawbury station commander and DHFS commandant.