The Royal Navy has taken delivery of its first AgustaWestland AW101 Merlin HC3 helicopter with an initial package of upgrades to support maritime operations.

Modified under the Ministry of Defence’s 25-aircraft Merlin Life-Sustainment Programme, the rotorcraft is one of seven being adapted during a first-phase activity. This will cover for the retirement of the Commando Helicopter Force’s last Westland Sea King HC4s in March 2016 and the updated aircraft are due to reach initial operating capability status “in spring 2016”, AgustaWestland says.

Updates include a folding main rotor head and a revised main undercarriage, which, along with new deck lashing rings, will allow for operations from naval vessels, plus communication system updates. 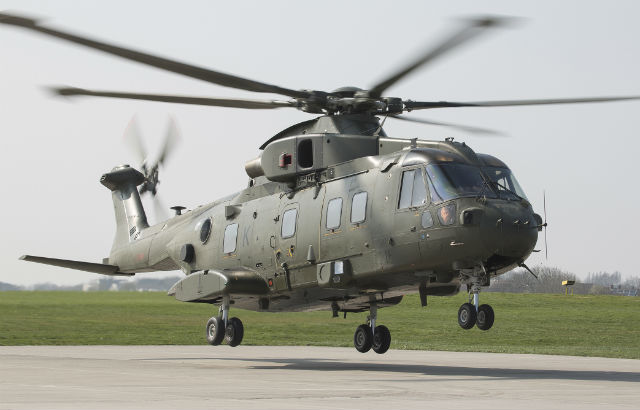 The lead aircraft entered modification in October 2014 and was flown in updated guise for the first time on 8 April. Flight trials concluded in August, says AgustaWestland, which is conducting the update programme at its Yeovil site in Somerset.

Flightglobal’s Fleets Analyzer database shows Merlin ZJ126 as having been built in 2001 for the UK Royal Air Force.

“The interim-standard of the life-sustainment programme sees fast-time conversion of the aircraft to operate in its new littoral manoeuvre role,” says Air Vice-Marshal Julian Young, director helicopters at the MoD’s Defence Equipment and Support organisation.

A second programme phase will update all 25 aircraft to the enhanced HC4/4+ standard, for reintroduction between 2017 and 2020. This activity will include updating the rotorcraft’s cockpit to a similar standard as that installed in the RN’s Merlin HM2 multimission helicopter fleet, and fitting an automatic main rotor blade folding and tail fold systems. The first aircraft to enter this process arrived in Yeovil in August 2015.