The work included operations in confined areas and at low level, demonstrating the type’s manoeuvrability over challenging objectives, say the companies. 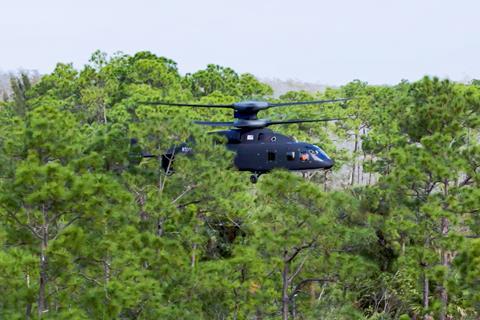 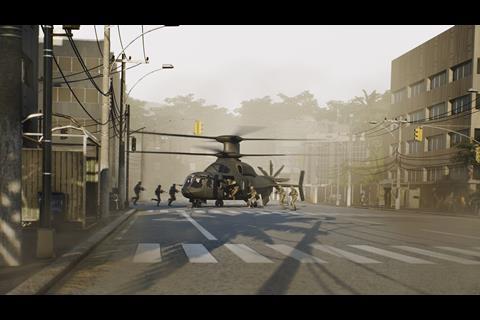 An artist's impression of Defiant X in a tactical situation

The SB-1, which forms the basis of the proposed Defiant X, was able to fly at 236kt (437km/h) in level flight, then rapidly decelerate to a “confined, unimproved landing zone” by reducing power to the propulsor – the SB-1 is a compound, co-axial helicopter that derives most of its forward thrust from a tail-mounted propeller.

“This type of level body deceleration allowed us to maintain situational awareness and view the landing zone throughout the approach and landing without the typical nose-up helicopter deceleration,” says Sikorsky chief test pilot Bill Fell.

“This confined area was extremely tight, requiring us to delay descent until nearly over the landing spot, followed by a near-vertical drop. We landed Defiant precisely on the objective with little effort as we descended into this narrow hole while maintaining clearance on all sides.”

The Defiant X is competing against Bell’s V-280 Valor, a tiltrotor that wrapped up over three years of flight tests in June 2021. While the Bell tiltrotor has a better overall cruise speed of 280kt, the Sikorsky-Boeing team argues the Defiant X’s manoeuvrability gives it the edge.

The stakes in the FLRAA competition are high, as the type will replace the army’s primary helicopter, the Sikorsky UH-60 Black Hawk, requiring potentially thousands of aircraft over the life of the programme.

Boeing’s vice-president of army systems, Tony Crutchfield, believes the Defiant X’s capabilities are particularly important in the age of great power rivalry, as it allows the rapid transport of cargo and troops over long ranges.

“It’s what we call building combat power rapidly, and aircraft like the Defiant X can do that,” says Crutchfield.

“In the Pacific, it’s even more important because your lines of operation are going to be dispersed over a wide area; you’re going to have these small bases and supply lines that’ll be positioned either on ships or on islands. You’re going to want to move more assets, manoeuvre in confined terrain and survive to build that combat power faster than your adversary can – so you can win.”