The company marked the delivery on 20 January at its assembly plant in Stratford, Connecticut, saying the type will continue supporting medium-lift helicopter requirements for the US military and foreign operators “decades into the future”. 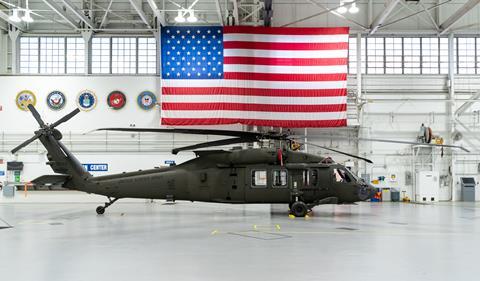 “Sikorsky, as a company, has been forged by the Black Hawk,” says president Paul Lemmo. “The Black Hawk and its variants… continue to demonstrate their versatility and readiness with the latest technological advancements and ongoing US and global investment in the aircraft.”

The H-60 and its many variants have arguably become the marquee product for a company whose founder and namesake, Igor Sikorsky, is credited with pioneering vertical flight.

The UH-60 entered service with the US Army in the early 1980s and has been a fixture in major conflicts since. Navies and air forces use variants of the Black Hawk for combat search and rescue, maritime logistics and troop delivery.

“For more than 40 years, the Black Hawk has remarkably supported soldiers in every major contingency operation the [US] Army has executed,” says Colonel Calvin Lane, project manager with the Army’s Program Executive Office Aviation.

In 2022, a modified version of the platform was rigged for pilotless flight by the US Defense Advanced Research Projects Agency, demonstrating further potential.

However, the UH-60’s largest customer is now beginning the process of replacing its Black Hawks.

The US Army in December announced a winner of its much-watched Future Long Range Assault Aircraft (FLRAA) competition to replace the UH-60. The service selected Bell’s V-280 tiltrotor over the Sikorsky’-Boeing DefiantX coaxial design.

Lockheed has since challenged that decision.

With a fleet of some 2,300 Black Hawks, the army contract represents billions of dollars in revenue over the coming decades.

Still, UH-60s will likely remain in service for decades as that massive acquisition unfolds.

“Even though the helicopter has been around longer than most of the soldiers it now supports, the army plans for it to be in front-line service another 40 years and beyond,” notes Lane.

Sikorsky will continue delivering new Black Hawks to the army under a 2022 contract worth as much as $4.4 billion with all options. That contract was originally scheduled to conclude in 2027.

However, a recent notice posted by the service indicated the army may seek to extend production through 2033. Sikorsky says the proposal could represent an additional 120 UH-60 orders.

The company is also under contract to produce some 113 HH-60W Combat Rescue Helicopters for the US Air Force – a design based on the Black Hawk.

Even as US orders eventually wind down, Sikorsky says it expects the UH-60 platform to remain popular abroad.

“We continue to see strong international interest in the Black Hawk due to its versatility and proven record,” says Nathalie Previte, vice-president of army and air force programmes for Sikorsky.

The company says the 5,000th Black Hawk is destined for the USA’s Missouri Army National Guard.