To be built in Poland by its PZL Mielec subsidiary, the S-70M is covered by a FAA restricted category airworthiness certificate that limits its operations to three core missions: agricultural operations; external cargo carriage; and forest and wildlife conservation, which includes aerial firefighting missions. 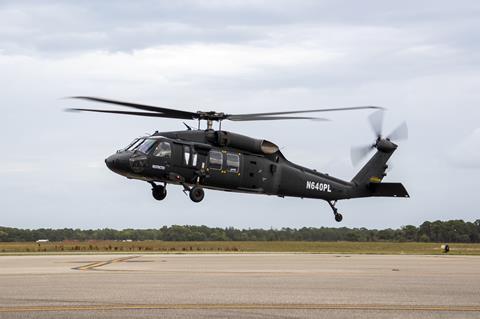 Helicopter will be built by PZL Mielec in Poland

While non-military parapublic users such as the California Department of Forestry and Fire Protection already operate the S-70i Firehawk, this is enabled through the FAA’s public use rules, which do not apply to commercial operators.

“Internationally, where the FAA restricted category is not widely accepted, we can now discuss with other civil aviation authorities the potential of validating the aircraft for challenging civil operations in their countries’ airspace.”

California public utility San Diego Gas & Electric took delivery of the first civil S-70M on 18 November at the Sikorsky Training Academy in Stuart, Florida. The helicopter will be modified to the Firehawk configuration and will enter service in 2023.

Sikorsky initially received an FAA type certificate for the S-70M in February 2019, based on the US Army’s UH-60M, and produced the first-of-type aircraft a year later. During 2020 and 2021, Sikorsky proved the aircraft conformed to the type design, and assisted the FAA in establishing the new type rating.

FlightSafety International developed the training curriculum for the new type and also upgraded an S-70i simulator to the new standard. Work is under way with the FAA to gain Part 142 approval for its training course, FlightSafety says.

Sikorsky in 1988 obtained FAA approval for the S-70A – a commercial derivative of the UH-60A.