The US airframer, part of Lockheed Martin, proposed the S-70M in its response to a request for information from the UK Ministry of Defence submitted on 9 December. 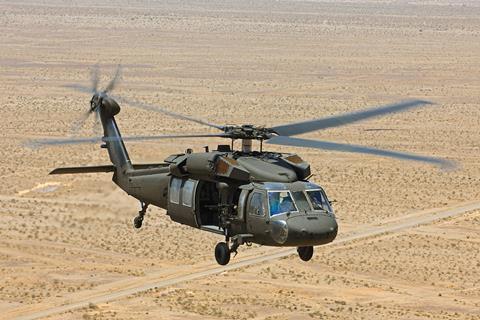 In addition, Sikorsky says it acknowledges London’s requirement to “maximise social value” in its offer and intends to deliver its proposal “in cooperation with UK-based companies involved in manufacturing, training and through-life support of the aircraft”.

No details of the planned industrial participation have been disclosed. But a recent contract secured with Romania for six S-70Ms could offer a clue to Sikorsky’s strategy: the helicopters will be assembled in Poland before local completion activities are performed by Deltamed and Romaero.

Sikorsky has made much of the ‘combat-proven’ status of the Black Hawk, particularly against its main rivals for the NMH deal – the Airbus Helicopters H175M and Leonardo Helicopters AW149.

Although the AW149 was a military helicopter from its inception, the manufacturer has seen more sales success with its AW189 civil variant. The H175M, meanwhile, is a militarised variant of the Airbus super-medium-twin.

However, both Airbus and Leonardo have promised to build the helicopters in the UK, should they win the NMH contest, opening the door to additional export sales.

Under NMH, between 36 and 44 helicopters are to be acquired to replace the Royal Air Force’s fleet of 23 Puma HC2 helicopters, plus three other rotorcraft types operated by the British Army and special forces. The full value of the contract could run to £1 billion ($1.3 billion).

Deliveries could begin in 2024, according to the MoD’s draft procurement timeline.