The Swedish Defence Helicopter Wing has made a successful operational debut aboard a surface ship operated by another nation, with an AgustaWestland AW109 having supported the EU’s Operation Atalanta activity off the coast of Somalia for almost three months.

Sweden early this year deployed two AW109s and 14 personnel aboard the Royal Netherlands Navy amphibious assault shipJohan de Witt, alongside a Dutch NH Industries NH90. One of the Swedish rotorcraft, which is ordinarily based in Ronneby, is maintained in an operational condition, with the other acting as a spare.

“The foreign ship is a big difference for us,” says Col Per Skanz, unit commander for Sweden’s four-month helicopter detachment in support of the ME04 multinational anti-piracy mission. Stockholm’s previous two such deployments were made aboard Swedish navy vessels. 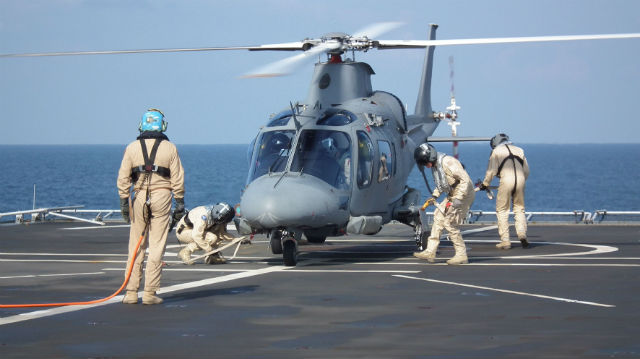 “The catchword for us has been integration,” says Skanz. “We think the same way, and we have the same procedures.”

Used for intelligence, surveillance and reconnaissance, and equipped with an electro-optical camera payload and machine gun, the AW109 has a 60nm (111km) operating range and a flight endurance of 1.5h.

“The AW109 is quick to start, and provides a fast reaction time,” Skanz says, adding that people aboard maritime vessels also “don’t see or hear you”.

Offering a 3h flight endurance and tasked with sea surface control duties, the NH90 can be operated up to 120nm away from the host ship.

By the end of April, the Swedish aircraft had been flown for around 120h, with a reported 100% availability rate. Maintenance activities have so far included a precautionary tail-rotor change, which was made in response to a vibration issue. The four-month operational duty – which will conclude later this month – is expected to total some 200 flight hours for the AW109.

“The combination of a bigger helicopter and a smaller one has worked well,” says Skanz. “Everyone on the ship is happy” with the bilateral cooperation, he adds, while noting: “We can go further.”

The EU had planned to end its long-running Operation Atalanta last year, but has extended the activity to 2016. While Skanz says there has been a drop in piracy and an associated increase in maritime traffic over the last two years, he notes: “What will happen if we aren’t there?”