Thales is to supply an improved version of its Searchwater radar and Cerberus mission system to deliver the UK Royal Navy’s Crowsnest airborne early warning (AEW) capability, following a selection announced on 22 May.

To be integrated with some of the RN’s upgraded AgustaWestland Merlin HM2 multirole helicopters, the equipment will feature numerous enhancements from that used with the service’s current Westland Sea King 7 airborne surveillance and control system rotorcraft – the last of which will be retired in three years’ time.

According to Thales, the selected system “will maximise re-use of the Ministry of Defence’s existing investment in equipment, training and expertise by upgrading, updating and adapting a battle-proven capability”. 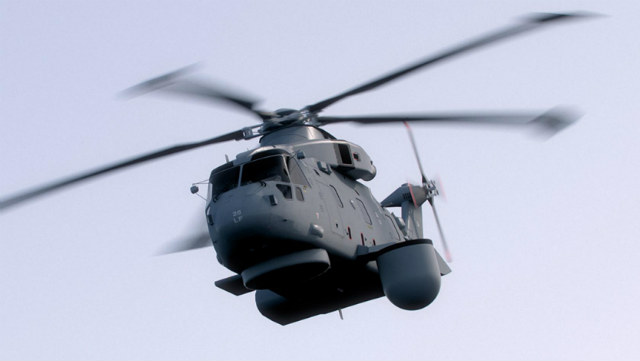 Merlin system prime contractor Lockheed Martin UK will conclude the Crowsnest programme’s £27 million ($41.8 million) assessment phase with Thales and AgustaWestland during 2016, ahead of a decision to proceed with manufacturing. The company selected the Searchwater/Cerberus combination after a competitive phase in which it had teamed first with Northrop Grumman and then Elta Systems to promote a solution using twin active electronically scanned arrays.

“We have accelerated our programme delivery strategy in order to sustain the capability seamlessly through our Merlin Mk2 helicopters as the Sea King Mk7 fleet retires from service in 2018,” says Air Vice-Marshal Julian Young, director helicopters at the UK’s Defence Equipment and Support organisation. “We are confident that the programme will be delivered as planned.”

Previously valued at up to £500 million for 10 systems, the Crowsnest project will deliver a critical capability in providing AEW cover for the RN’s future pair of Queen Elizabeth-class aircraft carriers. The MoD says the Merlin-mounted system will also be used “to support wider fleet and land operations”, following its introduction to service.

Thales says its mission system for Crowsnest will also be suitable for installation aboard other helicopters, plus fixed-wing platforms.