UK defence officials have pushed back the start of the tender process for the New Medium Helicopter (NMH) programme, potentially delaying the arrival of the new rotorcraft.

When the Ministry of Defence (MoD) issued a request for information relating to the NMH in late 2021, selection of the winning bidder was expected by early 2023. 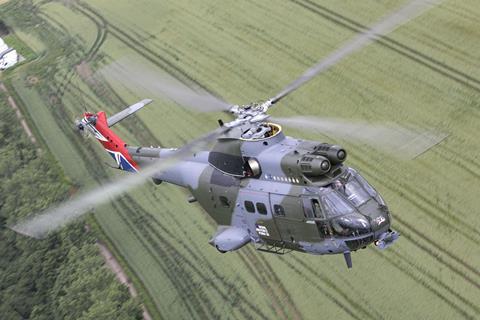 NMH is designed as successor to RAF’s Puma fleet, which marked its 50th anniversary earlier this year

However, under a revised timeline, the MoD is now not expected to issue invitations to negotiate – essentially the precise requirements for the programme – to manufacturers until the first quarter of 2023, according to two sources familiar with the matter.

No potential delay to the other key programme milestones has been disclosed; the MoD has previously said it wants deliveries of the winning NMH candidate to begin in 2025 to meet the proposed out-of-service date for the Royal Air Force’s (RAF’s) 23-strong Puma HC2 fleet.

But with detailed specifications, including the size of the purchase and its budget, not set to be revealed before the new year, there will be serious doubts about the ability of bidders to meet a severely compressed timeline, particularly if new production lines need to be established.

Additionally, the turmoil in Downing Street – and pressure to slash governmental spending – could also impact the procurement.

Formally launching the NMH programme in May this year, via a contract notice and dynamic pre-qualification questionnaire (DPQQ), the MoD said it was seeking 36-44 helicopters in a contract worth £900 million to £1.2 billion, also covering training and support. Based on exchange rates at the time, that gave a budget worth $1.1-1.4 billion – a figure that has since declined to $1-1.3 billion given the lower value of sterling against the US dollar.

The MoD said it would also notify those companies it wished to participate in the tender process by 30 September – FlightGlobal understands that will now take place in the coming weeks, potentially before the end of the month.

Likely participants include Airbus Helicopters, Leonardo Helicopters – both of which have pledged to build their respective H175M and AW149 rotorcraft in the UK if selected – and Sikorsky, which has yet to detail its plans for local content on the proposed S-70M.

NH Industries is also a potential candidate with its NH90 helicopter. It is understood to have responded to the DPQQ despite the presence of shareholders Airbus and Leonardo in the contest.

Other companies thought to have submitted replies to the MoD’s pre-qualification questionnaire include Bell with its 525 Relentless, and UK start-up AceHawk Aerospace, which is pitching the ML-70 – a heavily modernised pre-owned UH-60 Black Hawk – as a lower cost but high-capability solution.

The MoD was not immediately available to comment on the procurement schedule. However, answering a written parliamentary question on 18 October, defence minister Alec Shelbrooke said responses to the DPQQ are “being evaluated to determine a shortlist of credible suppliers.

“The second half of the competition, in which we will ask the selected suppliers to provide more detailed responses, is due to be launched later this financial year.” That period runs until 31 March 2023.

Beside its role as a Puma successor, the NMH is also intended to replace three other types in UK service: Bell 212s and 412s respectively based in Brunei and Cyprus, and Airbus Helicopters AS365 Dauphins operated in support of special forces missions.

But the Puma has been selected to take over the operations in Brunei and Cyprus on a temporary basis, potentially extending the HC2’s retirement date to 2027, one source has suggested.