UK keeps options open for Puma replacement, but deadline will be too early for FVL

The UK is unlikely to replace its fleet of Airbus Helicopters Puma HC2s with a high-speed platform from the USA’s Future Vertical Lift (FVL) programme due to timing issues, but nonetheless continues to assess that effort – and a separate NATO-led initiative – against its longer-term requirements.

While the UK believes that “there is a requirement for a medium aircraft in the future”, the 23 Pumas operated by the Royal Air Force are due for retirement by 2025, says Colonel Paul Morris, assistant head of plans, capability air manouevre for the British Army. 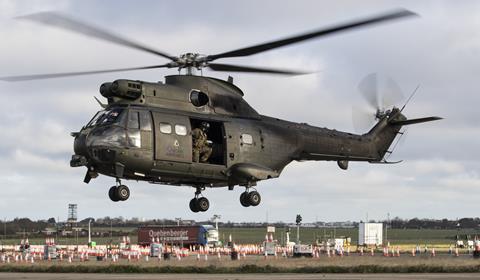 But that timeframe is likely to be too tight to dovetail with the US Army’s FVL effort, which foresees service entry of a new rotorcraft under its Future Long Range Assault Aircraft (FLRAA) programme – either the Bell V-280 Valor or Sikorsky-Boeing SB-1 Defiant – around 2030.

“We don’t believe that FLRAA will come on line rapidly enough to replace the capability currently delivered by the Puma,” Morris told the Royal Aeronautical Society’s Next-Generation Rotorcraft Conference on 20 January.

While the exact timeline has still to be decided, “suffice to say that they just don’t match in terms of the first entry into service on the other side of the pond and our own requirement to replace medium”.

While the Puma’s out-of-service date could be extended, says Morris, obsolescence issues will become more of a problem, despite it remaining a “capable aircraft”.

Options for an interim solution are currently being considered, says Morris, but may hinge on decisions taken in the Ministry of Defence’s ongoing Integrated Review.

The picture is further complicated by a requirement to replace the Royal Navy’s Leonardo Helicopters Merlin HM2s and HC4s in 2029-2030.

While both the Puma and Merlin could be replaced by a common platform, concerns around marinisation will be an issue.

Although FVL is not a short-term candidate for medium-lift, London continues to monitor the programme aided by the signing of an agreement with the US Department of Defense last year.

As part of that work, a “feasibility study” has been launched to assess which elements of FVL could address the “UK’s future rotary-wing requirements”. That study is due to report by year-end. 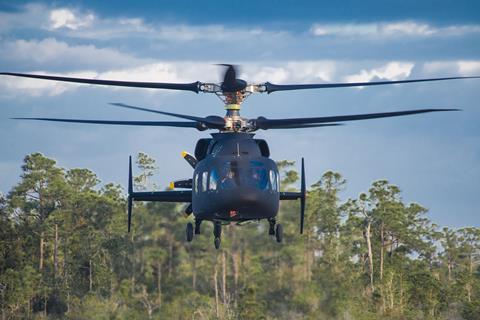 But in parallel the UK is one of five countries participating in a NATO programme to develop a common medium-class rotorcraft to enter service in 2035.

Lieutenant Commander Andrew White, who serves as secretary to that effort, as well as holding a post in the UK’s capability air manoeuvre body, told the conference that any interim Puma replacement would be expected to have a service life of around 20 years.

On that basis “the UK would be looking again around 2045”. If the service life of the Merlin fleet was extended, that would be retired around 2040.

NATO sees a requirement to replace around 1,000 medium-lift helicopters operated by non-US alliance members in the period from 2030 to 2045.

Other countries currently involved in the Next Generation Rotorcraft Capability (NGRC) effort include France, Germany, Greece and Italy, with more likely to sign up in the future, says White.

He sees no conflict between the NGRC and whichever aircraft the USA selects under FVL. The two programmes have been working “collaboratively” from the start, he says. “[NGRC] should be complementary to that rather than necessarily a rival.”

No decision has been taken on the desired speed of the NGRC aircraft, with the requirements kept “relatively broad”. That will enable industry to propose a number of possible architectures including tiltrotors, compound rotorcraft or conventional helicopters.

“We are working closely with the USA to tie this to FVL going forward.” The US Army wants FLRAA to have a maximum cruise speed of 280kt (520km/h).

The NGRC group envisages a base aircraft that “nations can easily reconfigure as they see fit,” White says.

Other key considerations include the use of modern materials, reduced cost of ownership, improved survivability and modern avionics, allowing for the possibility of optionally piloted flights and manned-unmanned teaming.