The US government has approved the sale of 288 Lockheed Martin AGM-114R Hellfire missiles to South Korea, as well as training and logistics support for the Netherlands’ helicopter fleet.

The value of the proposed South Korean Hellfire deal is $36 million, according to a Defense Security Cooperation Agency (DSCA) notification on 19 March. It includes the missiles themselves as well as various support services. 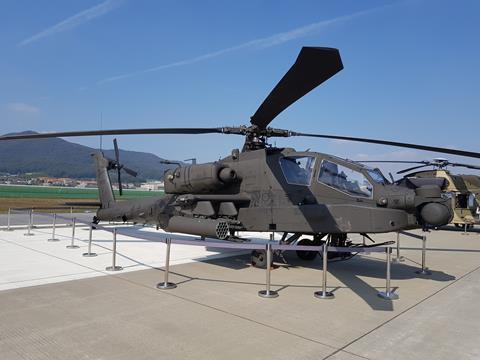 The Hellfire is the primary armament of the Boeing AH-64E Apache, of the which the Republic of Korea Army operates 36 examples.

“The ROK [Republic of Korea] intends to use these Hellfire missiles to supplement its existing missile capability and current weapon inventory for its AH-64E aircraft,” says the DSCA.

“The proposed sale will improve the ROK’s capability to meet current and future threats and ensure interoperability with other AGM-114R Hellfire missile users in the region. The Republic of Korea will have no difficulty absorbing this equipment into its armed forces.”

The proposed Chinook deal has an estimated cost of $125 million and covers support for the Royal Netherlands Air Force CH-47 training programme.

The proposed Dutch Apache deal also relates to AH-64 training at Fort Hood, and bears an estimated cost of $190 million.