The US Marine Corps (USMC) is getting two more Sikorsky heavy-lift helicopters from its spending wish list.

The US Navy (USN), under which the USMC falls administratively, said on 31 May that helicopter manufacturer Sikorsky was awarded a $185 million contract for the purchase of two more of the company’s CH-53K King Stallion helicopters. 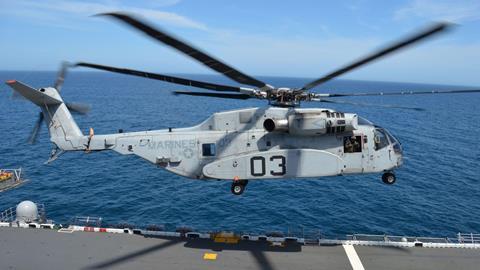 The King Stallion, which is intended to replace the CH-53E Super Stallion as the USMC’s heavy-lift rotary asset, is being built at Sikorsky’s production facility in Stratford, Connecticut. The programme is currently in its low-rate initial production (LRIP) phase, to which the recent contract award will be added under lot six.

The funds are being drawn from the USN’s fiscal year 2022 budget. The purchase was initiated based on the USMC’s unfunded priorities list, a legally-mandated wish list sent each year to Congress by each US military service chief.

Sikorsky confirms the new purchase, which brings the total LRIP order to 48 airframes. The USMC expects to purchase a total of 200 CH-53Ks over the full lifetime of the programme.

The USMC awarded Lockheed Martin subsidiary Sikorsky the heavy-lift contract for the CH-53K’s development in 2006. The long-time helicopter manufacturer was charged with producing a heavy vertical-lift platform to move armoured vehicles, troops and supplies from offshore assault ships to landing sites far inland.

The USMC says it plans for the CH-53K fleet to reach full operational capability in 2029.