Yorkshire Air Ambulance (YAA) has become the first UK customer for the new five-bladed variant of the Airbus Helicopters H145, signing for two examples of the light-twin.

Both helicopters will be delivered in 2023, says the operator, as it replaces an existing pair of H145s which entered service in 2016. 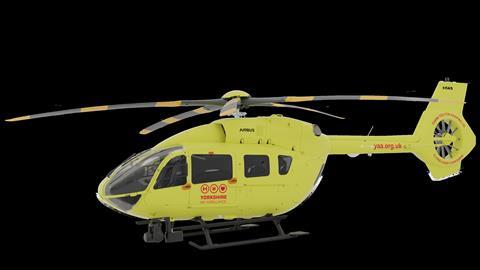 Charity will receive pair of five-bladed H145s in 2023

YAA says it examined the possibility of upgrading its current fleet to the five-bladed variant – including enhancements to the flightdeck and medical equipment – but concluded the costs and lead time would not make sense.

“If we had taken the decision to retrospectively fit all the extra technology and equipment we needed, by the time that had been completed we’d have been at a point where we would have been starting to look at replacing our current helicopters,” says director of aviation Steve Waudby.

“Bringing our plans forward by a year or two means we get best value, as well as bringing two even better state-of-the-art helicopters to the people of Yorkshire.”

YAA says the new helicopters will cost a combined £15.3 million ($21.4 million), although the current H145s will be sold to offset some of the outlay.

The new five-bladed main rotor, plus other modifications to the helicopter, lifts the H145’s useful load by 150kg (330lb). 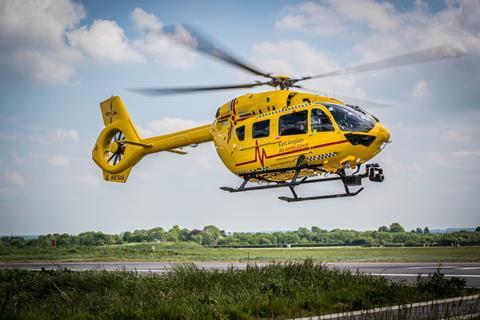 Babcock is to upgrade EAAA helicopters with new main rotor

Separately, Babcock has signed a new seven-year contract with East Anglian Air Ambulance (EAAA) that will see the charity’s two H145s upgraded via retrofit to the five-bladed configuration. In addition, the operator will shortly launch round-the-clock flying for EAAA.

No details of service entry for the enhancement were provided, however. Both helicopters used on the contract are leased, Cirium fleets data records.

Options for additional years would see Babcock’s role as EAAA’s exclusive aviation partner, which started 10 years ago, continue into 2031, it says.