IATA director general Willie Walsh has called on governments to ‘show backbone’ and reject airport requests to increase their charges to airlines.

Speaking during his opening address to the IATA AGM in Doha on 20 June, Walsh lamented that “the nightmare is becoming reality” as airports such as Amsterdam Schiphol and London Heathrow implement significant hikes in their charges, with others such as Dublin seeking to do the same.

“These are just the vanguard,” Walsh states. “Focusing on airports, out of the top 100, more than half announced increases for 2022 and 2023 – expecting their customers to make up for revenues they did not get during the pandemic. 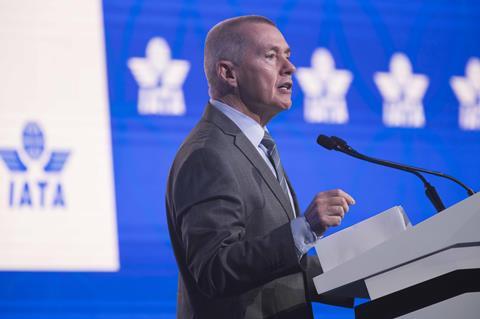 “This behaviour is why we oppose ’light touch’ regulation proposals by airports,” he continues. “And we categorically reject their characterisation of aeronautical revenue as insignificant.”

Airports body ACI World has previously cited research suggesting that while charges for aeronautical services represent up to 54% of airport revenues, the full basket of airport charges represents “only 5.1%” of the average base airfare and ancillary fees from a consumer perspective.

But Walsh claims that many airports are “addicted” to a “spend big and cream it off the customer” approach.

“And airport opposition to strong independent economic regulation demonstrates that they know it’s wrong,” he alleges.

Describing Spain as a “rare regulatory success story”, given its government’s recent rejection of AENA’s request to raise charges, he calls on other governments “to show similar backbone”.