IN FOCUS: Long march ahead for Chinese naval airpower

News of successful flight operations, however, was tempered by reports that Luo Yang, president of Shenyang Aircraft Corporation, died from a heart attack while aboard the ship for the landing trials.

Although the footage provides the first concrete evidence of Chinese aircraft carrier operations, rumours were already circulating last week on Chinese defence sites and on social media that flight trials involving the Liaoning had commenced.

Although the landings took place during a clear day with a calm sea state, official news agency Xinhua quoted vice-admiral Zhang Yongyi as saying that pilots have also mastered landings under unfavourable conditions including poor visibility and unstable airflow. He apparently made no mention on whether flight tests have occurred at night. 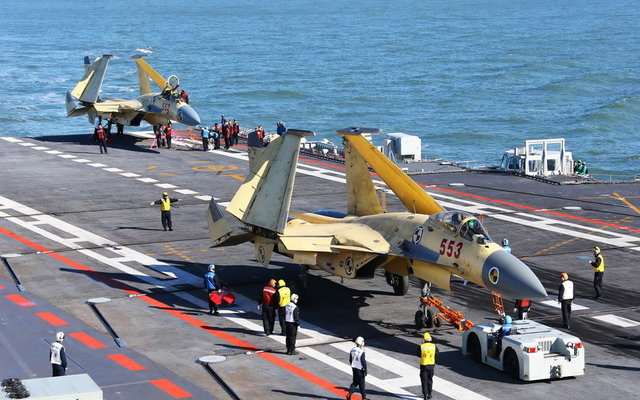 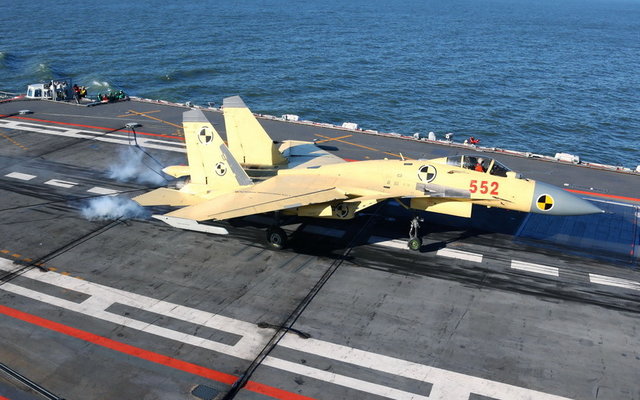 Xinhua indicates that five Chinese pilots have successfully arrested and taken off from the Liaoning.

"It's like 'dancing on a knifepoint' as the aircraft have to land on a very limited space," says Zhang. "We have done all these test flights from the very beginning, and finally we mastered the key skills for the landing of carrier-borne aircraft."

Footage from the Liaoning suggests parallels to US carrier deck procedure, with "yellow shirts" guiding aircraft to launch positions and waving them off, "blue shirts" moving aircraft about the deck, and "white shirts" observing aircraft movements and deck activity.

Richard Bitzinger, senior fellow of the Military Transformations Programme at Singapore's Rajaratnam School of International Studies, says it will be two to three years before China has a credible carrier air wing capability. The main challenge facing China is training of both pilots and deck crews, he says.

He also questions the number of aircraft a carrier such as the Liaoning, which is equipped with a ski-ramp, can comfortably accommodate, given that the ship will also need to deploy both airborne early warning & control (AEW&C) and search and rescue (SAR) helicopters.

The key challenge with the ship is deck space and layout, he says. The carrier's J-15s need to run about half the length of the warship at full afterburner for a ramp-assisted launch. This would make it challenging, if not impossible, to conduct the simultaneous launch and recovery of aircraft, says Bitzinger.

In addition, ramp-assisted take-offs - as opposed to the catapult-assisted take-offs used on US carriers - burn substantial fuel and limit aircraft payload. The J-15, a copy of the Soviet-era Sukhoi Su-33, is also large. Bitzinger points out that Russia has dropped the Su-33 in favour of the smaller Mikoyan MiG-29K for its carrier, the Admiral Kuznetsov. The Liaoning was originally laid down as the Varyag, sister ship to the Kuznetsov.

In any event, China aims to use the carrier primarily for training and for gaining experience with fixed wing operations at sea.

At the time of the ship's delivery in September 2006, a story by Xinhua on the defence ministry's website stated that the carrier will be used for training and "scientific research". This is consistent with experts' view on the ship's role, which has been the source of much speculation in recent years.

With the advent of J-15 operations from the Liaoning, China joins the elite fraternity of countries with a carrier capable of handling the arrested recovery of fixed wing aircraft. Only the USA, Russia, France and Brazil operate such warships.

India is on the verge of achieving this capability with the INS Vikramaditya, formerly the Soviet carrier Admiral Gorshkov. After early successes and flight trials, however, her delivery has reportedly been pushed back to the middle of 2013 owing to the cracking of bricks that support the ship's boilers.