IN FOCUS: MRJ continues to defy the doubters

The mood of industry players on the fourth day of Farnborough is generally one of exhausted relief. Customers have been met (or missed), decision makers have been wined and dined and hopefully a show daily has covered one's announcement - preferably on day one or two of the show. At the tastefully designed Mitsubishi Regional Jet chalet, however, company executives were quietly upbeat, sipping champagne over sushi prepared by an on-site chef.

The previous day Mitsubishi Aircraft had delivered the biggest surprise of this year's show: an agreement in principle with SkyWest Airlines for 100 MRJ90s. If confirmed, the deal will more than double orders for the twin-engined type to 165. The occasion marked the first MRJ order announcement at an air show - and the type's first order in over a year.

"After the SkyWest announcement we strongly feel the interest level for potential customers has increased," says Yugo Fukuhara, Mitsubishi Aircraft's director of marketing.

Fukuhara, who is hopeful that the SkyWest deal can be concluded by year-end, says the company has several ongoing campaigns and hopes to make more order announcements before the MRJ90's first flight, scheduled for the end of 2013. 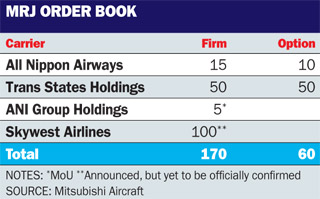 "Negotiations with airline customers take a long time," he says. "SkyWest was very fair and very supportive to reaching an agreement. In sales and marketing we aim to make announcements at a big air show. We did our best along with SkyWest to reach agreement in principle just in time for Farnborough."

The SkyWest news was especially dramatic, as it came just two months after a Mitsubishi Aircraft announcement that the first flight of the MRJ90 would be postponed to the last quarter of 2013 from the originally planned second quarter of 2012. Mitsubishi said it needed to "confirm respective fabrication processes" and "provide sufficient time for technical studies". The delay would also push the first delivery for launch customer All Nippon Airways back to the summer of 2015, from the first quarter of 2014.

"July's agreement by SkyWest to acquire 100 MRJs is a key vote of confidence in the programme by one of the world's largest regional airline holding companies," says Ray Jaworowski, senior aerospace analyst at Forecast International.

Mitsubishi Aircraft says the MRJ has more firm or pending orders before its first flight than other regional jets. Including the SkyWest commitment and a five-aircraft memorandum of understanding with Hong Kong leasing company ANI Group Holdings, MRJ orders stand at 170.

Fukuhara, who was a member of the original MRJ study team more than a decade ago, attributes the MRJ's strong orderbook to decisions made early in the programme. Initially, Mitsubishi thought of building a 50-seat regional jet, but soon decided rising fuel prices would make such an aircraft unviable. In addition, customer response for such a 50-seater was tepid.

A key decision he feels was ultimately vindicated was made in 2008, when MRJ decided to become launch customer of the Pratt & Whitney GTF geared turbofan powerplant, which became the PW1200G. According to Pratt & Whitney, the powerplant offers double-digit fuel-burn reduction, a 50% reduction in noise, and lower emissions.

"Before we launched the MRJ, the industry had a great deal of concern about geared turbofans, which they felt would make engines more complicated," says Fukuhara. "We have an engine department and engine experts at Mitsubishi. We worked with them to review the technical aspects [of the geared turbofan], weighed the risks, and concluded that the risk was not that large. It was clear that geared turbofans can realise very good fuel consumption and noise."

He notes that other manufacturers followed MRJ and elected to power their aircraft with Pratt & Whitney geared turbofans. One of the engine options for the Airbus A320neo is the PW1100G, the other being CFM International's Leap-1A. Variants of the PW1000G will also power the Bombardier CSeries and the Irkut MC-21.

However, impressed as they are by the MRJ's sales record, analysts stress the importance of aftermarket services. "They need to establish a global customer support network that can provide the appropriate level of support to the aircraft at entry into service and subsequently," says Chris Seymour, an analyst at Flightglobal's Ascend consultancy. "This has proven a greater issue for new regional aircraft OEMs in the past than programme delivery. Mitsubishi will no doubt have observed and learnt from these issues to ensure they create the network required to support the aircraft."

Aircraft financing will be another issue, Seymour adds, with banks and investors perhaps nervous about the aircraft in the early stages of deliveries. "There are expectations that the Japanese government and banks will support the product, with both export credit and finance packages to support manufacture and delivery of the aircraft. Overall, there is no doubt that Mitsubishi have the will and support of appropriate stakeholders to deliver the aircraft to market."

Jaworowski says Mitsubishi must ensure the aircraft receives adequate aftersales support. "Any new-entrant OEM must establish a true global support infrastructure if it wants to be a real competitor in the global market," he says. "Product support is an important consideration for airlines when they make an aircraft purchase decision. On this point, Mitsubishi appears to be ahead of the curve, with its announcement last year that Boeing will provide 24/7 customer support for the MRJ."

The deal Jaworowski refers to was disclosed at the Paris air show in 2011. The partnership to deliver round-the-clock customer support for MRJ operators will cover spare parts provisioning, service operations and field services. Boeing will also create a service and maintenance web portal for Mitsubishi, modelled on Boeing's customer site, MyBoeingFleet.com. In addition, Canada's CAE and Mitsui are providing training support for MRJ in Japan, with CAE to deploy an MRJ simulator in a US trainer centre, also in 2013.

Finally, market watchers warn of Embraer's next move. "It's difficult to go up against an established market leader like Embraer, especially when you're attacking a stagnant market, like regional jets," says Teal Group analyst Richard Aboulafia. "But the new generation of engines look compelling, and Mitsubishi is in the enviable place of being first to this market with Pratt's GTF. It all comes down to what Embraer does. If they move quickly to upgrade or re-engine with GTF or an equivalent from General Electric, Mitsubishi could suddenly face a much harder road."

Aboulafia says it is "highly unlikely" that Embraer will fail to offer a re-engined and improved E-Jet. Seymour and Jaworowski agree with Aboulafia's assessment that Embraer could be on the brink of an E-jet re-engining announcement.

Fukuhara sees the MRJ90 and MRJ70 as being good candidates to replace 50-seat regional jets such as the ERJ145 and CRJ200. He also sees it as a viable replacement for the Fokker 100 and British Aerospace 146. Later on, he sees the MRJ replacing types such as the CRJ700 and CRJ900.

At Japan Aerospace 2012, taking place in Nagoya from 9-14 October, Mitsubishi Aircraft will, for the first time, display the 8m (26ft) MRJ cabin mock-up - the same mock-up as at its Farnborough chalet. Given the MRJ's prominence in the national aerospace industry, the mock-up is likely to be one of the big attractions of what is one of the Asia-Pacific's sleepier air shows. The critical question is whether MRJ will spring another Farnborough-style surprise.