INTERVIEW: EVA to take a breather after aggressive growth

EVA Air has completed the first phase of its long-haul expansion following rapid growth into North America, and will now take time to formulate its strategy for the years ahead.

The airline has expanded aggressively over the past three years, with weekly flights to North America increasing from 45 to more than 80. This covers eight passenger destinations and two additional cargo points. It also has more than 120 weekly services to Southeast Asia, and more than 80 flights to Hong Kong and Macau.

"So, our North America, Southeast Asia, Hong Kong and Macau streams are very solid and comprehensive… these two years we have expanded pretty extensively," the airline's executive vice-president of corporate planning, Albert Liao, tells FlightGlobal in an interview in Taipei.

He concedes that there has been yield pressure on its North American routes, considering it has boosted capacity by more than 20% in the past two years and since it carries a good number of connecting passengers. The Taiwanese carrier has, however, seen loads pick up in the front end of the cabin, attributing this to its comprehensive network and frequency of flights attracting more high-yield business and leisure passengers.

An example is the three daily flights – in the morning, evening and late at night – for its Los Angeles route. It will also raise its San Francisco frequency to 18 times weekly by the end of the year, while already flying 11 times weekly to New York, daily to Seattle, and five-times weekly to Houston and Chicago.

EVA is the market leader in the Taiwan-North America market, accounting for more than 64% of total seat capacity, ahead of China Airlines (26.7%) and United Airlines (5.6%).

Backing the Star Alliance carrier's network expansion is fleet growth. This year, it will have received 12 jets: seven Boeing 777-300ERs, four Airbus A330-300s and a 777F. Capacity growth will slow next year, with only a pair of 787-9s to be delivered, the first of which will arrive in June.

The carrier will initially put the -9s on regional services to Hong Kong and Japan, before deploying them on "leaner" long-haul routes to Brisbane and possibly relaunching Sydney services.

The -10s will go toward strengthening its regional network to Southeast Asia and Northeast Asia, replacing the A321s that are being used on some routes. 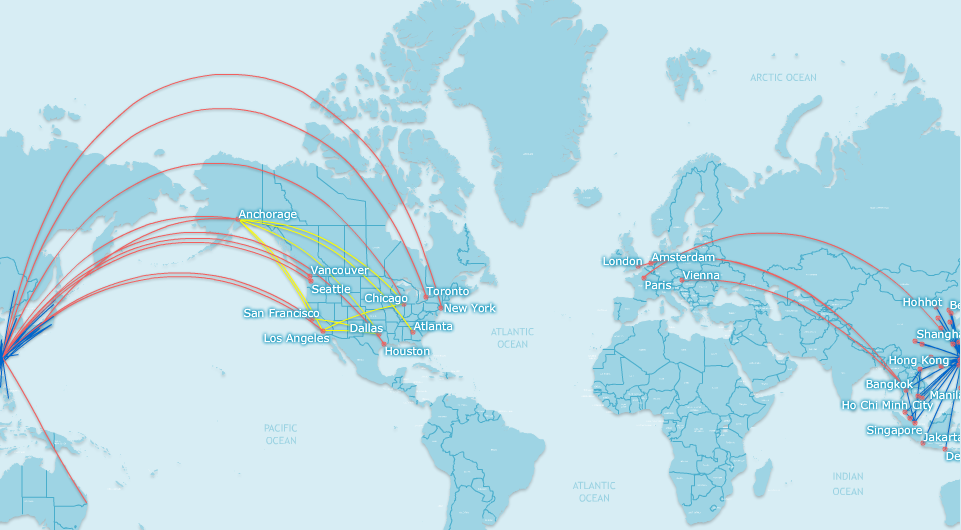 On Europe, Liao says EVA has upgraded all its services to Boeing 777-300ERs, and will launch three additional non-stop flights to Vienna from next March, bringing it to a daily frequency. Its services to London, Amsterdam and Vienna are operated via a stop in Bangkok, while those to Paris are direct.

The airline is "interested" in serving Germany, but says traffic rights are held by China Airlines. The privately owned carrier has faced pressure on European routes in the past year, after China Airlines moved to deploy new A350-900s on its European services, at the same time converting multi-leg routes into direct services.

Liao says EVA is satisfied with the loads on its European services, which averaged between 80% and 85% this year, but that its North American services are still more profitable. He attributes this to higher operating costs on European routes, adding that the Taiwanese market is not large enough to support non-stop services to Europe.

Closer to home, its cross-straits services have seen a 7% cut as the mainland continues to curb tourist traffic into the territory, with political tensions high since Taiwan's election of a pro-independence president last year.

This means cross-straits traffic contributes to about 10% of its total revenue, down from 14% previously, Liao discloses. EVA, however, continues to do brisk business on services to major Chinese cities such as Beijing, Shanghai, Shenzhen and Hangzhou.

Liao says EVA wants to grow its network further in Australia and Southeast Asia, but concedes that congestion at its Taipei Taoyuan hub means securing slots is becoming more challenging.

"Sometimes it's also difficult to find proper space to park the aircraft overnight so it's really tough for us to plan a more confident expansion," he says.

"As we slow down on capacity growth, we can take a breather and prepare for the next stage of expansion," says Liao. "One of the things we want is to improve our brand awareness, to invest in getting more exposure, especially in North America."