Iraqi air force pilots have started training on the service’s first two Lockheed Martin F-16Ds, following a US government decision to transfer the jets to an Air National Guard facility at Tucson International airport in Arizona.

The aircraft relocated to Tuscon on 16 December included Iraq’s first example, aircraft 1601, which made its debut flight from Lockheed’s Fort Worth production site in Texas in May 2014. It was accompanied to its temporary training home by two-seat aircraft 1602 (below). Both F-16Ds had been formally delivered to Iraqi ownership early last June. 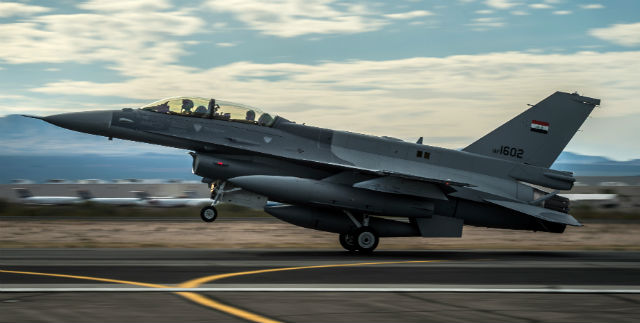 “Six more F-16s are scheduled to be delivered [to Tucson] over the next five months,” the USAF revealed in an 18 December news release.

“Bringing the aircraft here lets the pilots get used to their new airplanes in a good training environment. They can concentrate on how to fly this new aircraft and use its systems. When we can deliver the aircraft in-country, they’ll be ready to go,” says Lt Col Julian Pacheco, director of operations at the 152nd Fighter Squadron; part of the Arizona Air National Guard’s 162nd Wing.

Washington’s decision in mid-2014 to block the transfer of Baghdad’s new fighters outside of the USA was followed by Iraq’s swift acquisition via Russia of nine second-hand Sukhoi Su-25 ground-attack aircraft as an interim means of engaging Islamic State militants.